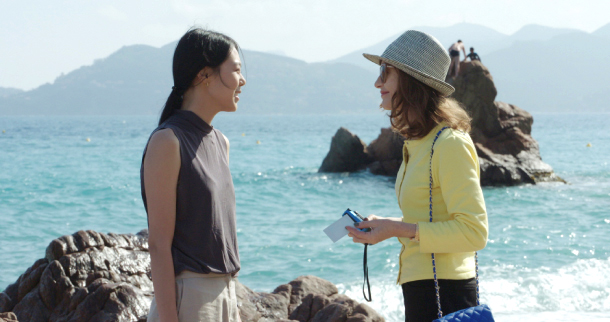 Love or hate him for his personal life, auteur Hong Sang-soo is back in local theaters with another critically-acclaimed movie.

Hong’s 20th feature, “Claire’s Camera,” released Wednesday, is the director’s latest rumination on the frustrating love lives of those in the film industry, played by formidable actors, including Isabelle Huppert, who previously worked with Hong on “In Another Country” (2012), and Hong’s muse and lover Kim Min-hee. This is her fifth collaboration with the filmmaker.

Yang-hye tells Man-hee she wants her to stop working for her because she no longer thinks Man-hee is honest. Though Yang-hye doesn’t offer an explanation, it soon becomes obvious that Man-hee’s one-night stand with Yang-hye’s lover Wan-soo (Jung Jin-young), an alcohol-loving film director, led to the decision.

Into this awkward triangle appears Claire (Huppert), a cheery music teacher from Paris who records moments with her ever-present blue Polaroid camera. Claire quickly befriends Man-hee, and indirectly connects her with Yang-hye and her boyfriend through her pictures.

“If I take a photo of you, you are not the same person anymore,” Claire insists. “The only way to change things,” she says, “is to look at everything again very slowly.”

The movie entertains throughout with several comedic scenes. After Man-hee gets dismissed, for example, she jumps up to her boss and offers to snap a selfie together to “remember our parting.” In another scene, French cinema royalty Huppert says “it’s my first time in Cannes.”

Hong and Kim’s most recent feature “Grass” is their next project on deck. The upcoming movie, set in a cafe, failed to make up to the screening list at the upcoming Cannes Film Festival, scheduled to kick off on May 8. But it is scheduled to be released in local theaters during the second half of this year.