On set of ‘Crazy Rich Asians,’ a sense of catharsis

On set of ‘Crazy Rich Asians,’ a sense of catharsis 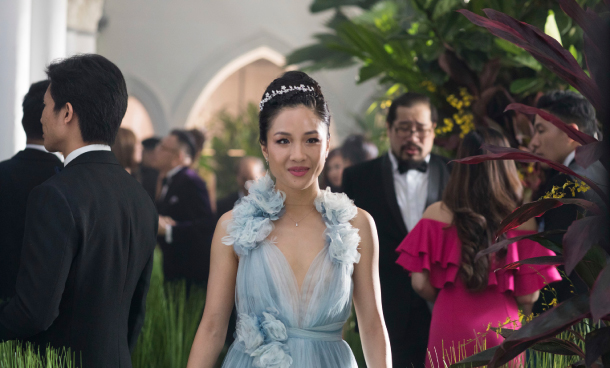 This image released by Warner Bros. Pictures shows Constance Wu in a scene from “Crazy Rich Asians,” in theaters on Aug. 17. [AP/YONHAP]

LOS ANGELES - It’s been 25 years since a major Hollywood studio released an English-language film with a primarily Asian cast. The last was Wayne Wang’s 1993 adaptation of the generational tear-jerker “The Joy Luck Club.”

But that dry spell is about to end with the release of the opulent romantic comedy “Crazy Rich Asians.” The film is based on Kevin Kwan’s best-selling book about a Chinese-American woman who gets a culture shock when she meets her boyfriend’s family in Singapore.

Veteran producer Nina Jacobson said that when she and her Color Force partner Brad Simpson (“The Hunger Games”) read Kwan’s manuscript, they knew it had to be a movie. “We just tore through it,” Jacobson said. “It was so specific that it became really universal: Anybody who has ever faced in-laws who felt that they were not worthy of their beloved.”

However, they knew the film would likely never survive the studio development process. They decided to have a vision, script and budget to sell as a package before going to the marketplace. Ivanhoe Pictures’ John Penotti signed on to help and Warner Bros. would ultimately sign up to partner with them and release the film.

“Hollywood has done a bit of a disservice by not taking us into these worlds that we’re just now seeing between ‘Black Panther’ and things on TV,” Simpson said. “There is a hunger for not just token representation but to really dive into the world of different ethnicities and races.”

Meanwhile, Jon M. Chu, who would eventually sign on to direct “Crazy Rich Asians,” was hearing about this new book from family members. And he understood why. His last name is the same as that of the main character, Rachel Chu, and they’re both from Cupertino. There’s even a reference to his family in Kwan’s book.

“I think a lot of Asian-Americans go through the same journey…I relate to having that dual cultural identity of being full-on all-American, all-California boy, but having a Chinese side to me,” Chu said. “I remember going to Asia for the first time, and there’s a very specific emotion that you feel that’s like, ‘Oh, this feels like home, but it’s not my home and these people don’t see me as being part of this.’ Then when you’re home you start to notice people may not see you as part of that either.”

Having known Jacobson and Simpson for years, he knew they would “protect” the film and do it right. He signed on to transport audiences to an unbelievable world of wealth, privilege and tradition - part Edith Wharton, part “Gossip Girl.”

Chu brought on Malaysian-born screenwriter Adele Lim to give the script an Asian specificity and set off to assemble his dream cast. The worldwide search had casting directors looking in Canada, New York, Los Angeles, Beijing, Shanghai, Hong Kong, London, Australia, Singapore and Malaysia. All had to be English-speaking - and have the right accents, too.

Constance Wu was chosen to play the lead, Rachel. They found an unknown to play her boyfriend, Nick, in Henry Golding, a handsome and charismatic TV host who had the perfect English accent to play the London-schooled heir, and landed on Michelle Yeoh to be his disapproving mother, Eleanor.

But even this hand-picked ensemble caused some consternation on the internet over the specific ethnicities and whether they matched exactly with what the book laid out. Chu said the fact that there’s even a discussion is important. A film having a female Asian-American lead and also a majority pan-Asian cast is significant. A USC Study found that 44 of the top 100 films from 2016 featured no Asian-American speaking characters.

“Since I’ve graduated from drama school, I never get to play the lead,” Wu said. “The fact that Asian-Americans never get to center the narrative means that their parts are always going to be not as whole and fleshed-out.”

That made it an emotional experience for many on set. “Everyone had gone through the process of what it’s like to be an Asian-American in Hollywood or around the world,” Chu said. “You could see the difference between someone like Michelle Yeoh who literally said, ‘I’m the majority where I’m from so I don’t understand the plight that you guys are going through.’ It was very shocking for her to see how it affected these young actors and how people would just cry on the set and how happy they were that they got to do this.”

Wu, who is an outspoken advocate for Asian representation, said the film is significant for differentiating the Asian experience and Asian-American experience. “You show that our culture is more than just skin-deep,” Wu said. “You show our similarities and how we’re different.”

Although the film doesn’t open until Aug. 17, excitement is growing with the new trailer and some extremely positive reactions from an early screening in Los Angeles for the press.

“I hope people go see it because I think we have a great movie and if they go see it, it changes things,” Chu said. “People have to show up. I guarantee four new stories of Asian-Americans will be greenlit in two weeks if it comes out and does well. That’s what’s on the line and that’s what I think is still up in the air.”