Cho Yong-pil is celebrated in NYC

Cho Yong-pil is celebrated in NYC 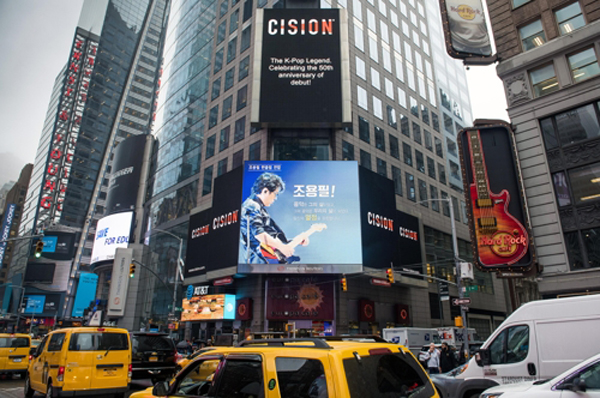 An association of Cho’s three fan clubs said Monday it raised money to rent a coveted spot in Times Square for their favorite star.

The ad shows an image of the singer playing a guitar with Korean phrases “Cho Yong-pil! Music was his life, and his music became our life. We support your passion.”

Earlier this month, the association put up a giant placard with the same image on an outer wall of a tall building near the Gangnam subway station in southern Seoul.

“We hope the New York City ad will be the driving force for a good start of his grand [50th anniversary national tour],” the association said in a statement. “We’re grateful to all the fans who helped make this meaningful event happen.”

The 68-year-old singer is set to kick off the tour titled “Thanks to You” at Jamsil Stadium in southern Seoul on May 12. The tour will continue in Daegu on May 19; Gwangju on June 2; Uijeongbu, Gyeonggi, on June 9; and Jeju in the second half of this year.

Debuting as a member of the rock band Atkins in 1968, Cho skyrocketed to stardom after making a solo debut with the single “Come Back to Busan Port” in 1976.

In 1980, he released his first studio album “The Woman Outside the Window.” The album includes the title track and the hit song “Short Hair,” which became the nation’s first million-seller.

He has since put out 18 more full albums, including his latest “Hello” in 2013, to become one of the most influential Korean pop stars.