CJ Logistics to launch its own Silk Road route

CJ Logistics to launch its own Silk Road route 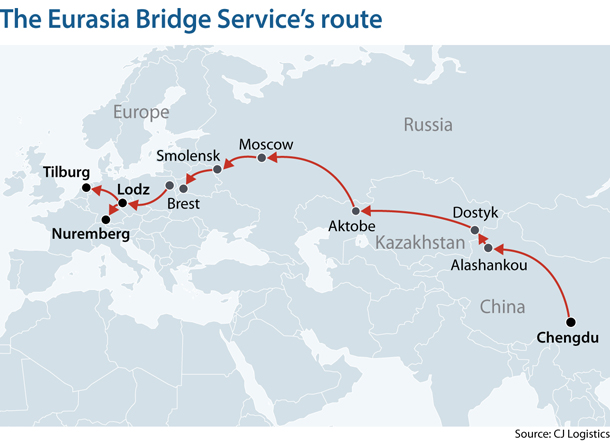 CJ Logistics will launch a door-to-door overland delivery route for goods that will stretch from China to the Netherlands, the company announced on Tuesday.

The Eurasia Bridge Service will use both Trans China Railway (TCR) trains and trucks to transport goods directly to manufacturing facilities and logistics centers.

The TCR is a freight railroad that runs more than 4,000 kilometers (2,485 miles) between China and Europe. CJ Logistics will operate trains from Chengdu in China to Lodz in Poland, Nuremberg in Germany and Tilburg in the Netherlands.

The cargo will then be unloaded and delivered to logistics centers or manufacturing facilities located within 400 kilometers of the train’s destination. Containers that depart from Europe and China will both follow the same route.

It is the first time a logistics company has developed a door-to-door route using both trucks and trains to offer ground transportation service between Asia and Europe.

CJ Logistics is currently focused on expanding its presence across Eurasia. The company has big plans to develop services that will link 30 major European cities and 24 Asian countries in the future.

Its global railway partners and operations across Asia, such as China’s CJ Rokin Logistics, are crucial to establishing these links.

In March, the company signed a memorandum of understanding with the Russian logistics company Fesco, which promised to help CJ gain access to the Trans-Siberian Railway.

The initiative is rooted in rosy expectations for future relations between the two Koreas, which are on the upswing after the inter-Korean summit last week.

“If the gateway to North Korea should be open, sending freight from Busan to Berlin, the Netherlands and Moscow will be possible. It would be a modern version of the Silk Road,” said the company spokesman.