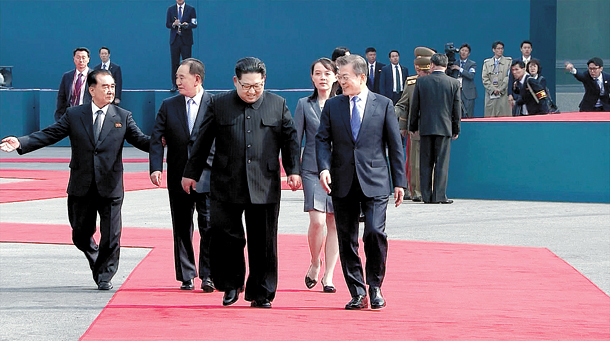 Kim Chang-son, far left, the chief secretary for North Korean leader Kim Jong-un, pulls Kim Yong-chol, vice chairman of the Workers’ Party’s Central Committee, away from the leaders of the two Koreas last Friday as they walk down a red carpet leading to the Peace House, where their summit was held. [SCREEN CAPTURE]

His chief secretary, Kim Chang-son, demonstrated just how painstaking the work is last Friday when he spent practically the entire day pouncing around the North Korean leader, checking every little detail related to his summit with South Korean President Moon Jae-in.

Observations of his performance that day showed just how much authority Kim Chang-son has in Kim Jong-un’s inner circle, according to a Blue House official who spoke exclusively with the JoongAng Ilbo. In one instance, the chief secretary summoned Ri Son-gwon, a cabinet-level official handling relations with South Korea, with the flick of a finger.

“After officials from South and North Korea agreed on the leaders’ travel route and schedule, Kim Chang-son collected [all the details] and directly reported them to Chairman Kim [Jong-un],” the Blue House source said. The fact that Kim Chang-son also served Kim Jong-un’s father, Kim Jong-il, proves his bona fide loyalty. Last month, he was elevated to an alternate member of the Workers’ Party’s Central Committee.

Several recorded moments from the summit suggested the scope of Kim Chang-son’s influence. When Kim Jong-un stepped out of a building on the northern side of the border to approach Moon, who was waiting on the southern side, the chief secretary motioned toward Kim Yong-chol, vice chairman of the Workers’ Party’s Central Committee, to step away.

A few minutes later, Kim Chang-son was seen pulling Kim Yong-chol and Kim Yo-jong, Kim Jong-un’s younger sister, away from the leader as he and Moon were walking the red carpet toward the Peace House, where the summit was held.

“It’s impossible to compare a North Korean official in charge of the supreme leader’s protocol with anyone in South Korea,” a government official in Seoul said. “No matter how high a rank someone holds within the regime, [he or she] has to unconditionally take orders from Kim Chang-son if the orders are related to Chairman Kim Jong-un’s safety, and I think we’ve seen numerous cases during the summit falling into this realm.”

Kim Chang-son is known to have climbed the ranks since the era of Kim Jong-il, when he worked as a butler and learned from the chief secretary at the time, Kang Sang-chun.

He was elevated to chief secretary toward the end of Kim Jong-il’s rule and solidified his standing as Kim Jong-un rose to power in December 2011.