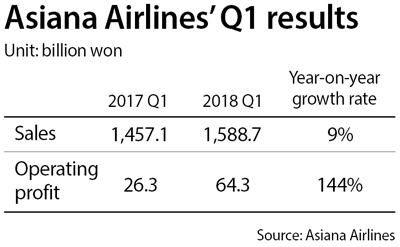 The full-size carrier generated 1.6 trillion won ($1.4 billion) in quarterly sales between January and March, a 9 percent increase on-year. It raised 64.3 billion won in operating profits, up 144 percent from last year.

Asiana admitted that the recent success comes from a boost in its core business - more people taking flights and more air cargo. International passengers account for 60 percent of the company’s sales, while cargo takes up 22 percent.

Nearly all international routes saw an increase in sales this year. The exception was tickets to China, which dropped 4 percent on-year. The number of travelers to Europe shot up 23 percent, while people going to the United States increased 13 percent.

“This suggests that the strategy to expand long-haul flights was a successful one,” the company said in a statement.

In February, Asiana Airlines CEO Kim Soo-cheon announced that the company will increase long-haul flights to 60 percent by 2022, while closing down or handing over short-distance flights to its LCC subsidiaries: Air Seoul and Air Busan. The portion of long-haul flights at the time was 53 percent.

Asiana hoped that the new strategy would give it a competitive edge as it vies with competitor Korean Air in a difficult market where LCCs are rapidly expanding their business, launching flights traveling to increasingly distant destinations.

Sales of air cargo rose 13 percent year on year, thanks to an increase in transportation for IT components such as chips and displays.

A pending issue regarding Asiana Airlines’ earnings for the next quarter is the return of Chinese tourists after the fallout over the deployment of the Thaad antimissile system. The general opinion of analysts is that the worst has passed, although it remains to be seen exactly when Chinese tourists will start returning in large numbers.

Another problem left to resolve is the airline’s liquidity crisis. Asiana has 4 trillion won in debt, with 2 trillion set to mature this year. The company said in a statement that it plans to pay off this debt by the year’s first quarter by selling off assets and issuing bonds.