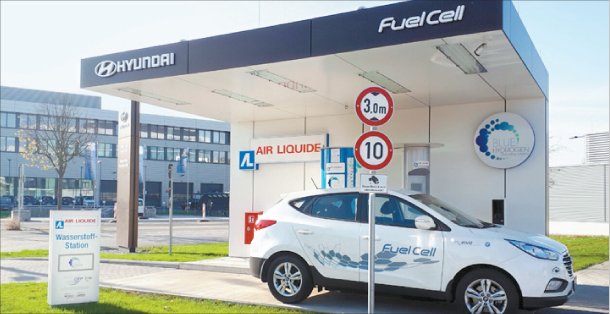 A hydrogen refueling station at Hyundai Motor’s office in Germany outside of Frankfurt. Every day, around 10 fuel-cell cars recharge at this station, which is equipped with technology from French energy company Air Liquide. [KIM DO-NYUN]

Businesses and the government are coming together to install more hydrogen fueling stations around Korea, in an effort to promote greater adoption of the eco-friendly cars.

There is one major problem, though ? Korea only has 11 hydrogen refueling stations, most of which are located in research centers or outside Seoul.

Recognizing this shortage of infrastructure, the government proposed a joint venture with various automakers and energy corporations to build more hydrogen refueling stations.

This project will follow in the footsteps of Japan H2 Mobility, a joint venture started in Japan on Feb. 20. Automakers Toyota, Nissan and Honda, as well as gas corporations and the Development Bank of Japan formed the limited liability company with the goal of establishing more hydrogen refueling stations around the country.

Through the venture, Japanese companies attain low-interest loans of 1 to 2 percent from the state-owned Development Bank of Japan, with the government matching investments with subsidies. 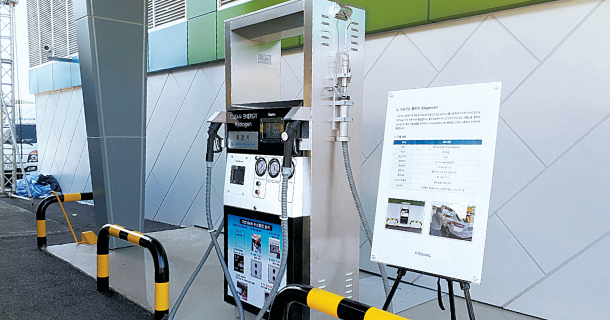 Japan is far ahead of Korea in the realm of fuel cells. As of March, it had 2,800 hydrogen-powered vehicles in operation and 100 hydrogen refueling stations, outnumbering hydrogen facilities in the United States and Germany.

Japan H2 Mobility will be dissolved once its objectives have been fulfilled.

“During a time when fuel-cell vehicles aren’t widely available, these special-purpose joint ventures are a revolutionary way to bring private companies into the game,” explained Lee Seung-hoon, secretary general of H2Korea, which aims to bring government agencies and companies together to promote hydrogen power. “Germany and the United States are building more stations by adopting similar organizational models.”

Until now, private companies in Korea have been reluctant to build hydrogen infrastructure as there were only 200 fuel-cell vehicles nationwide. There was also hesitancy on the government’s part in helping conglomerates like SK and Hyosung build more hydrogen stations as it didn’t want to face accusations of unfairly favoring larger companies.

The joint venture promises businesses interested in hydrogen energy an attractive investment destination. Once it fulfills its objectives of building refueling stations, the hydrogen stations will be distributed among the private investors.

Private companies, however, are not sitting idle.

Hyundai Oilbank, the carmaker’s oil refining affiliate, is building the country’s first complex energy station in Yeonam-dong, Ulsan, for completion by June. At this station, all kinds of cars can recharge or fill up, including hydrogen, electric, gasoline, diesel and liquefied petroleum gas.

SK Group, which owns numerous energy-related businesses, is consolidating plans for its own hydrogen stations.

These projects come amidst rising government interest in realizing hydrogen fuel’s potential. On April 10, the National Assembly proposed a motion to create a systematized plan for a hydrogen-powered economy, and designate regions to test such alternative energy activities.

“Besides building infrastructure for fuel-cell vehicles, this motion proposes to create hydrogen fuel via renewable energy sources like wind and solar power,” explained Rep. Lee Won-wook of the Democratic Party.

Experts emphasize the importance of the government’s role in raising initial investments for hydrogen infrastructure.

“While consumers can easily adopt electric cars if battery technology improves, fuel-cell cars require heavy investment in hydrogen stations,” said Cho Chul, a researcher at the Korea Institute for Industrial Economics & Trade. “If the government is facing a limited budget, it may want to focus on increasing the budget allotted for fuel-cell cars rather than electric cars.”

“In Japan’s case, the government is dedicated to helping Japan H2 Mobility achieve its goal by providing subsidies, operating fees and [station] installation loans,” said H2Korea’s Kwon Sung-wook. “The special-purpose entity we’re pursuing in Korea will have to benchmark Japan.”