LG’s new G7 ThinQ is all about the bass

LG’s new G7 ThinQ is all about the bass 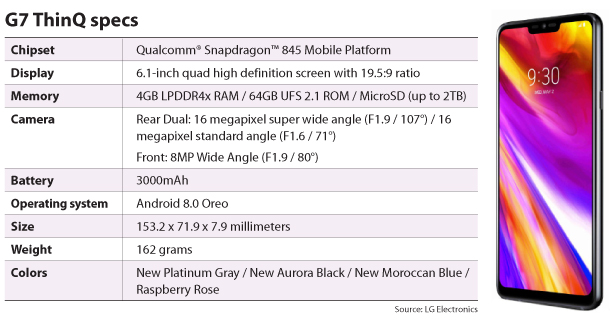 LG Electronics’ ambitious new phone, the LG G7 ThinQ, was unveiled in Seoul on Thursday, a day after its grand showcase in New York.

The new phone comes with upgrades to the most basic features - the display and audio - as well as improved AI functions compared to its predecessors. It is branded as a ThinQ device, a brand that was previously only used on LG’s home appliances that have AI functions.

The phone has a 6.1-inch display, the largest size among all LG phones. To ensure the device was still easy to hold despite the large screen, the Korean electronics maker halved the size of the bezel compared to the earlier G6 series phones. The G7 is 15.32 centimeters (6.03 inches) long, 7.19 centimeters wide and 0.79 centimeters thick.

The screen is powered by LG’s new liquid crystal display technology, dubbed the Super Bright Display, which enables customers to view content even under direct sunlight. Despite the souped-up display, the Korean phone maker said it managed to enhance power efficiency by 30 percent. The display has six different modes for video playback, including cinema and sports modes.

In terms of audio, LG equipped the mobile device with a so-called Boombox Speaker, which utilizes the phone’s internal space as a resonance chamber to significantly boost the bass - the effect can be further amplified by placing the phone on a solid surface. According to the company, it is the first time that such a feature has been applied to smartphones.

“With Boombox Speakers, customers no longer need to carry separate Bluetooth speakers,” said Hwang Jeong-hwan, chief of the mobile communications division at LG Electronics. “The feature is also applicable in business, since it can greatly enhance the quality of business meetings on speaker phones.”

A number of AI features were introduced as well. When LG began adding the ThinQ brand on smartphone names, it made it clear that it plans to bolster AI features throughout its phone lineup. Currently, many of the features are powered by Google’s AI technology.

The most notable AI feature is the new camera, which can automatically optimize filters based on the shooting target and environment. There are 19 filters for the AI to choose from.

The phone can also be linked with ThinQ-branded home appliances. Users can use the smartphone as a television remote control or to check air quality offered by air purifiers and the temperature inside refrigerators.

Among the Google-partnered services is Google Lens, introduced for the first time in Korea according to LG, and Google Assistant. The lens enables users to search for information on objects such as landmarks, plants, animals and books using AI and the phone’s camera. As for the voice assistant, the company said it is upgraded so it can respond to customers speaking from as far as 5 meters (16 feet) away from the phone.

“You all know that [LG’s mobile division] hasn’t been showing very good performance recently and it is difficult to disclose an exact target at this point,” Hwang said. “But we remain solid on our strategy to go back to the basics and gradually win customers’ trust.”

In an effort to “win customers’ trust,” LG announced an improved after-service plan for Korean consumers. The company stressed that it set up a software upgrade center dedicated to giving customer support on software upgrades in March and promised it will offer fun features like specialized emojis in later upgrades.

Customers looking to purchase the new G7 ThinQ can trade in their old phone and get a maximum of 120,000 won in return.

Presales of the phone will begin on May 11 through May 17. The phone will go on sale domestically on May 18, according to the company.