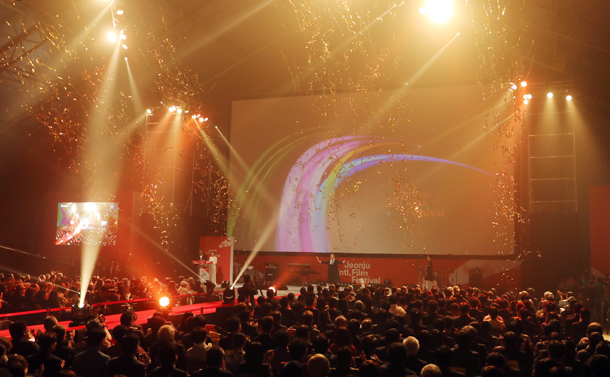 The opening event for Korea’s second-largest film festival took place at the Jeonju Dome in the southwestern city of Jeonju, North Jeolla, with a flashy red carpet event attended by stars like Koo Hye-sun, whose short film “Mystery Pink” is being screened at the event, Nam Gyu-ri and director Lee Joon-ik of “Anarchist from Colony” (2017).

Screening began at 7 p.m. with “Yakiniku Dragon.” Directed by Chong Wishing, the Japanese drama is a story revolving around a Korean-Japanese family who is forced out of their restaurant-home to make way for urban development in the 1970s. Set in the Kansai region of Japan, the film highlights the vitality of people in the face of adversity.

JIFF will run for 10 days and will close with the stop-motion animation film “Isle of Dogs.”

Directed by Wes Anderson of “The Grand Budapest Hotel” (2014), the movie is set in a near-future version of Japan, where all the dogs from a fictional city have been exiled to an off-shore rubbish dump following an outbreak of canine flu. While the animated-feature has garnered a great deal of critical praise, it has also sparked controversy after claims of cultural appropriation.

“We’re very much aware of the controversy. But [the film] contains the reality of both Japanese and American politics, and it’s open to diverse interpretations,” said JIFF programmer Lee Sang-yong at a press event held ahead of JIFF last month. “Raising questions and highlighting such controversies is the basis of a film festival.” 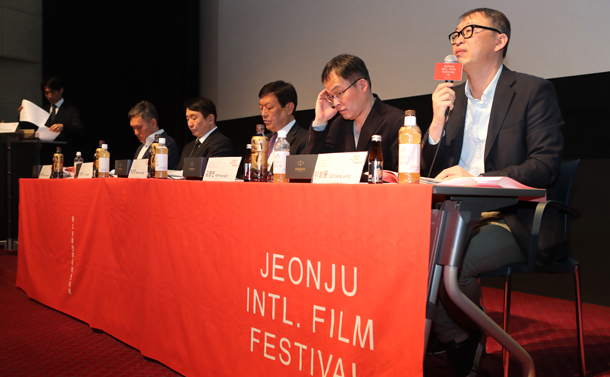 Jeonju International Film Festival programmer Lee Sang-yong introduces some of the films that will be screened at this year’s event during a press conference held in April. [YONHAP]

JIFF will screen a total of 246 movies from 46 countries, with 202 full-length features and 44 short films.

In the International Competition section, 10 titles will be vying for the prize. They include Marcelo Martinessi’s “The Heiresses,” revolving around a middle-aged lesbian woman forced to navigate a new life after her partner is sent to jail for fraud, Muayad Alayan’s “The Reports on Sarah and Saleem,” about an extramarital affair between an Israeli woman and a Palestinian man, and Ioana Uricaru’s “Lemonade,” about a Romanian widow forced to sexually pleasure a U.S. immigration official to get her residency.

As for the Korean Competition section, 10 movies, including Jung Dae-gun’s “Mate,” about a couple who met via an online dating service, Lee Seung-yup’s “The Darling,” which tells the tale of a struggling female actor’s journey to Vancouver, and Jung Hyung-suk’s “The Land of Seonghye,” which highlights the hopelessness of young people striving to find a job, have been invited. Not a single documentary managed to make it to the competition list this year, as “there weren’t any notable pieces,” according to JIFF programmer Kim Young-jin.

One notable change in this year’s JIFF is the expansion of Jeonju Cinema Project (JCP), the festival’s centerpiece film-funding exercise.

Backed by the success of JCP’s previous movies, like last year’s “The First Lapse,” which clinched the Best Emerging Director Prize at Locarno Film Festival for director Kim Dae-hwan, and the documentary, “Our President,” on late President Roh Moo-hyun, JIFF decided to add two more films from the existing three to five.

Three of the films are from local directors while the two others are from foreign directors. They include Lee Hark-joon’s “A Good Business,” a documentary that captures the unseen sides of the human rights movement for North Korean defectors, and Camila Jose’ Donso’s “Nona. If You Soak Me, I Will Burn You,” an intense feminist drama.