Gov’t attempts to rein in prices of squid, potatoes

Gov’t attempts to rein in prices of squid, potatoes 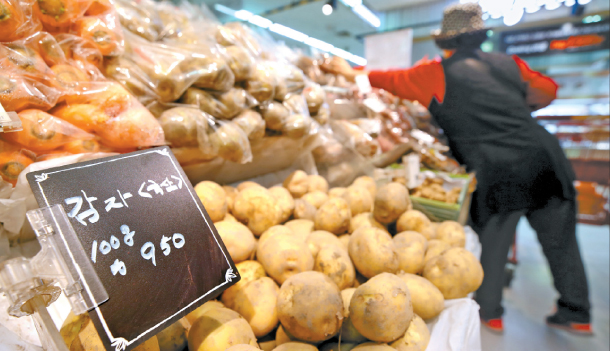 Expensive potatoes are stacked in the vegetable corner of a grocery store in Seoul on April 22. The unusually cold winter hurt potato harvests, bringing prices up. [YONHAP]

The government will import potatoes and dip into its emergency supply of squid in a bid to tackle rising consumer prices.

On Friday, government officials discussed solutions to alleviate consumer concerns over rising prices during a meeting chaired by Vice Minister of Strategy and Finance Ko Hyoung-kwon.

The consumer price index for April increased 1.6 percent on-year, according to a monthly report released by Statistics Korea on Wednesday. Prices of agricultural produce were particularly high, climbing 8.9 percent on-year, the highest increase since last August.

To address the price instability the government plans on releasing huge quantities of potatoes, radishes and squid into the market.

Through importing and other means, the government will make around 4,400 tons of potatoes available in the market by the end of this month. It will also release radishes and squid from the government reserve storage.

Potato prices jumped up the most this month among all vegetables, surging 33.5 percent compared to March levels.

A box containing 20 kilograms (44.1 pounds) of potatoes cost 78,292 won ($72.68) on April 30, more than double the average late April price for potatoes, according to the Korea Agro-Fisheries & Food Trade Corporation.

Potato prices took a hit in recent months because of the unusually cold winter combined with an exceptionally warm March, according to a report by the Korea Rural Economic Institute published Monday. Fickle weather conditions delayed and hurt the harvest, leading to a huge price hike in spring potatoes grown in greenhouses, which are concentrated in the North Jeolla cities of Namwon and Gimje. Jeju-grown potatoes also suffered.

The institute expects potato prices to stabilize in June.

Squid, a key ingredient in many Korean snacks and bar food, is in short supply as well. Illegal fishing by Chinese trawlers in North Korean waters, which began in 2004, has resulted in the catch size decreasing every year since 2005. Before heading south for the fall, squid usually inhabit the northern part of the East Sea.

Besides introducing more produce, the government has also added pears, green chili peppers and winter green onions to the list of agricultural produce it will actively control the supply of to stabilize prices. The original list included napa cabbages and radishes.

The government also plans to cooperate with consumer organizations to keep an eye on restaurants and eateries to prevent them from raising menu prices due to rising costs.

In order to help business owners deal with the high costs of raw ingredients, the government will systematize group buying and facilitate direct online purchasing.