KIM HAN-BYUL
*The author is a head of the digital contents lab at JoongAng Ilbo. 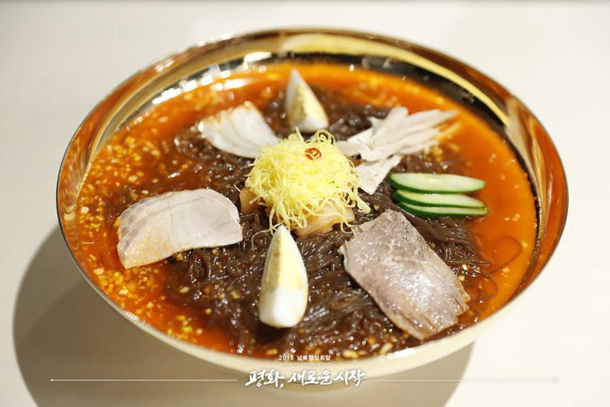 Some people in their 20s said that it was their first time trying Pyongyang naengmyeon. “It’s unique, but quite bland,” they said while adding vinegar, mustard and spices to the broth. I was a bit hesitant and wanted to say, “That’s not how you eat Pyongyang naengmyeon. It ruins the taste and aroma of buckwheat.” But I changed my mind and did not say it as I was reminded of my experience 11 years ago.

In June 2007, I was covering the first opening of the Naegumgang tour, the inner side of Mount Kumgang, in North Korea. I had Pyongyang naengmyeon at a restaurant, Pyongyang Okryugwan’s Mount Kumgang branch, and when I added vinegar, the server scolded me. He said that I had to lift the noodles and add vinegar, instead of putting it in the broth.

I had mixed feelings. They were certainly proud of the noodles, but did he need to meddle in how I ate them? Over the past few years, the so-called noodle-splain posts on social media gave me the same feeling.

“Noodles with low buckwheat content are fake.” “Noodles must not be cut with scissors or be eaten with steel chopsticks.” “It is ignorant to add vinegar, mustard or spices.” The naengmyeon doctrine is what some Pyongyang naengmyeon aficionados claim.

After enjoying the cold noodles for lunch, I looked at the noodles served in the dinner banquet. The noodles were very dark. They seemed different from not only the famous Pyongyang naengmyeon places in Seoul but also the Okryugwan dish I had in Mount Kumgang 11 years ago. Korea Chamber of Commerce Chairman Park Yong-sung, who attended the banquet, wrote on social media that the noodles were tougher than he thought.

Food is culture, and culture is a product of taste and reference. There is no unchanging truth or the correct answer. Times and people change, and the taste and proper way to eat a certain dish will also change. We can move to the future by protecting the tradition and embracing changes. It applies to generational issues and inter-Korean relations as well.

Before and after the summit on April 27, a credit card company reported that the card usage at 1,500 restaurants serving Pyongyang naengmyeon increased by 80 percent, and the increase of usage by those in their 20s was far higher than other age groups. I welcome the excitement over Pyongyang naengmyeon, but in the South and in the North, we don’t need to tell others how to eat.