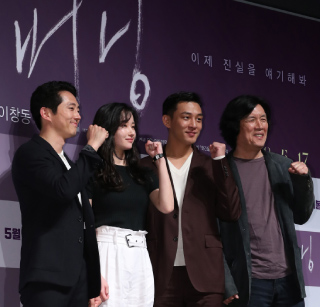 The cast and director of “Burning” at a press event in Seoul on Friday. From left to right are Steven Yeun, Jeon Jong-seo, Yoo Ah-in and director Lee Chang-dong. [YONHAP]

Critically acclaimed director Lee Chang-dong’s first film in eight years is based off a cryptic short story by Haruki Murakami, retold to reflect the realities of youth in Korea today.

“Burning” is in competition for the Palme d’Or at Cannes, where it will screen on May 16. It will be released in Korea the following day.

“I wasn’t sure about how I should reunite with audiences,” Lee said, referring to his eight-year hiatus. “I had deep thoughts on the world we’re living in, and I hoped to tell a story on youth. ‘Burning’ is an outcome of that.”

Lee spoke to the press on Friday before flying to France for the Cannes Film Festival. “The youth today are perhaps the first generation to live a life that is more challenging than that of their parents,” the director said. “The world has developed and advanced, but not necessarily for the better. Living in such a world, I imagine there must be an underlying sense of indignation and helplessness among the youth.”

But the difference between the agony of past and present generations, he said, is the sense that youth today don’t know what they’ve lost hope for anymore. “Although ‘Burning’ does not directly address that frustration, the film depicts the mysteriousness of the world that young people face,” Lee said.

The story revolves around a struggling deliveryman named Jong-su, played by Yoo Ah-in, who one day meets Ben (Steven Yeun), an enigmatic man with an unusual hobby: burning barns. What unfolds is a mysterious incident involving Ben and an old friend of Jong-su’s, played by Jeon Jong-seo.

“Unlike past scripts I read, this one was very specific,” Yoo said. “The characters’ emotions and lines were so detailed that it felt like a novel. It contains a great deal of Korean sentiment to the point of seeming like a completely different work from the original [short story].”