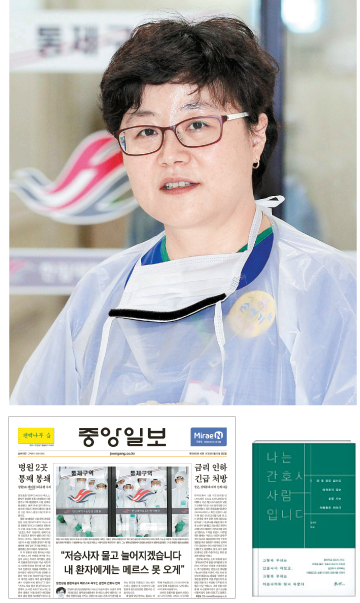 In the summer of 2015, when Korea was battling an outbreak of the Middle East respiratory syndrome (MERS), a nurse made headlines for standing by her patients despite the risk of contamination.

Hallym University Dongtan Sacred Heart Hospital in Hwaseong, Gyeonggi, was handling six MERS cases when it decided to place Kim Hyeon-a, a nurse at the hospital, in quarantine along with the patients she was handling. She later wrote a letter to the JoongAng Ilbo highlighting the dire circumstances that nurses like her were facing during the MERS crisis. The letter earned her public admiration and shed light on the medical community’s efforts to combat the surprise outbreak.

Last month, Kim published a book, “I Am a Nurse, A Person,” that calls for greater respect toward nurses. “If nurses are tired, the quality of patient care is bound to decline,” Kim said. “Nurses must live for patients to live. A nurse is someone who needs enormous courage.”

The book comes at a time of crisis for the profession. Police recently questioned the head nurse at Ewha Womans University Mokdong Hospital in western Seoul over the death of a newborn, while another nurse at Seoul Asan Hospital, southern Seoul, took her own life because of bullying from her superiors. Cases of patients lashing out at nurses are on the rise.

Kim decided to write her book in September 2017, and although her decision preceded the incidents at Ewha and Asan, they occurred before her book’s publication date and strengthened her resolve to complete it. She cited empathy as her primary motive for writing. “I was shocked when my own brother confessed he didn’t know how I worked until after the MERS letter was published,” she said. “Others are even more clueless. I wanted to reveal how the life of a nurse really hasn’t changed much in 20 years. The MERS crisis reminded me that only with empathy can we change the world.”

Kim said nurses are more like “overworked warriors” than “white-robed angels.” Every day, they’re administering injections, moving patients and managing equipment. “An angel isn’t human, but a nurse is,” she said. “There is a limit to how much we can do.”

She recalled injuring her hip seven years ago while moving a patient in the emergency room. She still had to go to work the next day. “Because I had no substitute, I had to endure the pain for three months with painkillers and a hip brace,” she said. “On the surface, being skilled at injections seems like all it takes, but this is far from reality.”

Kim’s 21-year nursing career came to an end in July 2017. “I made my decision when I witnessed one of my fellow nurses being dragged out by a patient’s guardian,” she said, “and these ceaseless cases of nurses succumbing to suicide or death by overworking felt so near to me.”

On the culture of bullying by superiors, Kim said, “We shouldn’t brush it aside as faults of a few bad eggs. When a new nurse commits a mistake, the lives of patients are on the line. This goes to show just how much rigorous instruction and technique it takes to perform this job. Veteran nurses are required to teach their juniors and take on additional tasks. This is a structural problem based on a perpetual lack of labor and work-related stress.”
Kim admitted she was blind to problems in the profession until she left the job and started writing her book. After its release, she said she received many letters of gratitude from nurses. They thanked her for giving them courage and expressed hope that more of their stories would be told.

Today, Kim’s main instrument is a pen rather than a syringe, but she still yearns to work with patients again. “In the future, I hope to save more people and help nurses. If the opportunity arises, I’d like to be a professor at a nursing school or a public servant.”