Moon and Trump to meet in Washington on May 22

Moon and Trump to meet in Washington on May 22 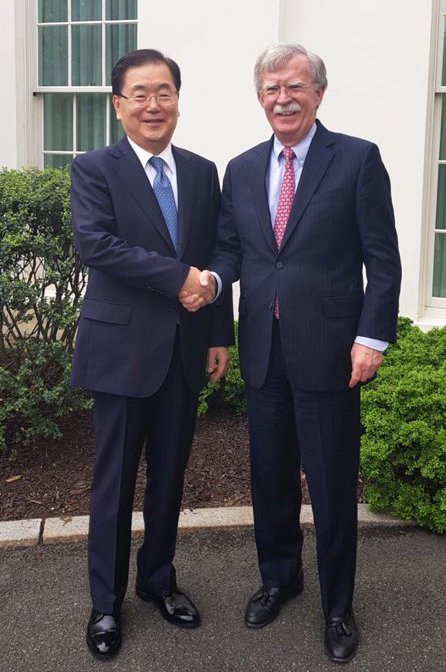 President Moon Jae-in will meet U.S. President Donald Trump at the White House on May 22 to discuss the upcoming North Korea-U.S. summit, the Blue House said on Saturday. The date and location of the high-stakes meeting between North Korean leader Kim Jong-un and Trump have yet to be announced.

Moon is expected to share the detailed outcome of his summit with Kim last month and convey the North Korean leader’s intentions to Trump. The presidential office said in a statement that the two leaders would “have an in-depth discussion over ways to make sure the North-U.S. summit will be successful on the back of achievements forged in the April 27 summit.”

On the upcoming Moon-Trump meeting, the White House said the two “will continue their close coordination on developments regarding the Korean Peninsula following the April 27 inter-Korean summit,” and discuss “Trump’s upcoming meeting with North Korean leader Kim Jong-un.”

In what will be the fourth summit meeting between Moon and Trump, the former human rights lawyer is expected to deliver what Kim wants to receive in return for denuclearization. While details of Kim’s demands for ridding his country of its nuclear arsenal were not included in the Panmunjom Declaration, the product of the April 27 summit, Kim was thought to have conveyed to Moon what his intentions were in regards to denuclearization.

The absence of precise denuclearization measures and possible rewards for the North in the Panmunjom Declaration reflects Seoul’s position that it intends to be a mediator trying to narrow down the differences in the positions of Pyongyang and Washington.

The announcement on the Seoul-Washington summit was made following a visit by Chung Eui-yong, head of the Blue House’s National Security Office, to the U.S. capital to meet with John Bolton, the U.S. national security adviser.

“I had an in-depth discussion with John Bolton, assistant to the president for national security affairs, to explore ways to make the upcoming North-Washington summit successful,” said Chung upon arrival in Seoul on Saturday.

Chung’s visit to the White House was made after a New York Times report that Trump was considering reducing the size of the United States Forces Korea (USFK).

There are about 28,500 U.S. soldiers in South Korea, a reminder that the two Koreas are still at war as the 1950-53 Korean War ended in an armistice, not a peace treaty.

At the April 27 inter-Korean summit, Moon and Kim agreed to declare an end to the war and settle on a peace treaty in place of an armistice by holding three-way talks involving the two Koreas and the United States or four-way talks that also include China.

Trump on Friday ruled out the option of downsizing the USFK at this point, saying, “Troops are not on the table.”

Asked whether he would use the possibility of reducing the size of the USFK as a bargaining chip in his highly anticipated meeting with Kim, he replied, “Not really, not at this moment, certainly not.”

But Trump left open the possibility of a future adjustment to the USFK, whether in size or maintenance costs, noting, “Now, I have to tell you, at some point into the future, I would like to save the money,” a remark that reflects his oft-spoken campaign remarks in which he complained about the U.S. bearing too much financial burden to defend other countries.

Bolton also flatly rejected the NYT report, saying it was “utter nonsense.” The White House said in a statement that during the Bolton-Chung meeting the two “reaffirmed that there are no plans to change the United States–Republic of Korea bilateral defense posture in the Republic of Korea,” using the formal name for South Korea.

Amid growing expectations for the North Korea-U.S. summit, Trump has yet to announce the time and venue for the historic event, though he said the decision has been made.

“We have the time and place all finished,” said Trump on Saturday at a meeting in Ohio. On the outcome of his summit with Kim, he remarked, “We’ll see what happens.”

Trump isn’t expected to wait for long before he announces the schedule and place for his meeting with Kim. On Friday, he said he and his team “now have a date and we have a location. We’ll be announcing it soon.” One candidate venue is Panmunjom, where dramatic images of Moon and Kim were taken at the April 27 meeting.

Trump’s recent remarks have heightened expectations that he could choose the border village over other alternatives, such as Singapore and Mongolia.

“There’s something I like about it [holding the summit in Panmunjom], because you’re there, if things work out there’s a great celebration to be had on the site, not in a third-party country,” said Trump on Monday.

Seoul also favors Panmunjom for the first-ever meeting between the two leaders of North Korea and the United States in recognition of the symbolism the place carries. It is where an armistice treaty was signed by the U.S.-led United Nations Command on behalf of South Korea and the North Korean and Chinese militaries on July 27 in 1953, halting the war that left much of the peninsula in ruins.

If the Kim-Trump summit is held in Panmunjom, Trump might even become the first sitting U.S. president to set foot in North Korean territory by simply crossing over the inter-Korean border in a conciliatory gesture similar to Moon’s. The South Korean president briefly crossed the border at Kim’s suggestion and stayed on the northern side for a brief 10 seconds before crossing back to the South with Kim holding his hand, one of the most iconic photos of the day.