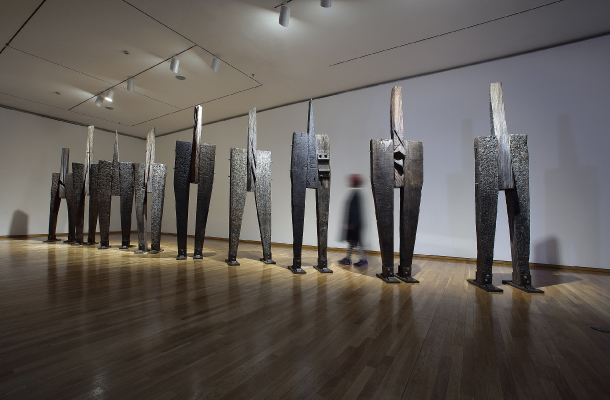 Nine huge statues of standing people made of discarded railroad ties on display at sculptor Chung Hyun’s solo exhibition, which runs at the Kumho Museum of Art in central Seoul until May 22. [KUMHO MUSEUM OF ART]

Sculptor Chung Hyun’s exhibition at the Kumho Museum of Art in central Seoul is an homage to abandoned building materials. In particular, his work reflects the long time they held up heavy weight.

Among the works on display are a group of nine huge statues of standing humans, made out of used railroad ties, which are part of the pieces that Chung presented in the garden of the Palais-Royal in Paris in 2016.

“When I was young, I lived near a railroad in Incheon,” he said. “I still remember my horror and awe about the massive nature of the passing freight trains and about the sleepers that withstand them.

“I like the ties’ surfaces, roughened by friction with railway ballasts, as it proves they endured difficult times … resembling my own life.”

Another highlight of the exhibition, which features 30 works, is “Untitled,” which is made of a 7-meter (23-foot) long wooden girder from a 300-year-old hanok (traditional Korean house). The girder, damaged by termites and abandoned, is decorated with faded dancheong, or traditional paintwork.

“I put some wooden sticks on it as if I were grafting branches,” the artist said.


The exhibition runs through May 22. For details, visit www.kumhomuseum.com.