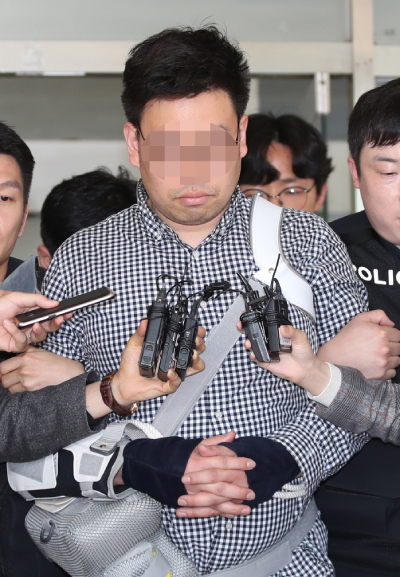 Reporters surround the man who punched Rep. Kim Sung-tae as he is escorted out of the Yeongdeungpo police station, western Seoul, Monday. [YONHAP]

The man who punched Rep. Kim Sung-tae, floor leader of the Liberty Korea Party, during a hunger strike on Saturday, has been detained after confessing that his initial target was Rep. Hong Joon-pyo, leader of the largest opposition party, according to police on Monday.

The 31-year-old surnamed Kim admitted to “trying to punch Hong out of anger for denouncing the recent inter-Korean summit as a ‘political show,’” police said, and added that “when he couldn’t find Hong, he changed his plans to target Kim Sung-tae, the floor leader.”

Kim was taken from Yeongdeungpo Police Precinct, western Seoul, to a pretrial hearing at Seoul Southern District Court on Monday.

Kim confidently admitted that he planned the attack on his own and will “follow whatever decision is made by the court.” Police offered him a mask and cap before parading him before reporters, but he refused to wear them.

Authorities acquired CCTV footage of Kim getting out of a taxi across from the National Assembly in Yeouido, western Seoul, on Saturday and entering the building at around 1:22 p.m. When he couldn’t find Hong, he went to a nearby convenience store to buy a snack and re-approached the main building of the assembly at about 2 p.m. He found Kim Sung-tae and tried to get closer to him by offering the snack about 30 minutes later, and proceeded to punch him in the face. He was immediately arrested by officers, and the lawmaker was taken to a nearby hospital.

Authorities believe it was a premeditated attack planned solely by the young man as he did not come in contact with any accomplice in the footage. Police requested a pretrial detention warrant on Sunday.

“I just hope the Liberty Korea Party will stop its hunger strike and straighten itself out to put in the effort to make a better Korea,” Kim said before leaving for his pretrial hearing.

After the assault, police said he shouted, “I’m from Busan and have hit my father before,” while expressing his rage towards the Liberty Korea Party for opposing the current administration’s effort to improve inter-Korean cooperation after the two Korean leaders met late last month.

Kim Sung-tae held a press conference Monday on the front steps of the National Assembly wearing a neck brace.