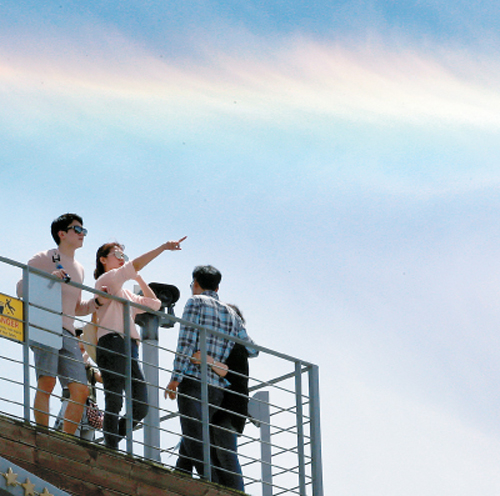 Visitors to the Imjingak in Paju, Gyeonggi, near the military demarcation line, see a rainbow in the sky on Monday. There has been an increase in tourism to spots near the border area following the inter-Korean summit. [YONHAP]

Regional governments across the country are gearing up to resume inter-Korean cooperation projects after the two Koreas agreed to boost exchanges, visits and contacts “at all levels” in their latest summit.

Almost all joint projects with North Korea were forced to shut down under South Korea’s right-leaning Lee Myung-bak administration when Seoul announced a package of stiff sanctions banning cooperation with the regime on May 24, 2010, in response to Pyongyang’s torpedoing of the Cheonan warship on March 26, 2010, which killed 46 South Korean sailors. To this day, the North has denied any accountability.

The Panmunjom Declaration, signed between South Korea’s President Moon Jae-in and North Korean leader Kim Jong-un on April 27, includes an agreement that both countries would encourage more interaction with each other in order to “rejuvenate the sense of national reconciliation and unity.”

Last Friday, Busan’s metropolitan government formed a task force on cooperation with the North and is expected to hold its first meeting this Wednesday to discuss job creation, fisheries, marine transportation and basic industries. Late this month, the office plans to invite 23 experts in those fields from the private sector for advice on communicating with North Korea.

The provincial government of Gyeonggi established seven new teams dedicated to putting the Panmunjom Declaration into practice, including seven advisers who will help the office with providing anti-tuberculosis and malaria prevention treatment to North Korean citizens, as well as forestry pest and disease management.

Incheon hopes to cash in on tourism by asking the government to open new cruise itineraries linking China, North Korea and the South, enabling Chinese tourists to visit both countries on a single trip. The city wants to set aside 10 billion won ($9.3 million) by 2022 to construct a so-called Peace Road connecting both Koreas; hold a joint international academic conference on the Goryeo Dynasty (918-1392) to celebrate the 1,100th foundation anniversary this year; and construct a welfare benefits center for South Koreans displaced by the 1950-53 Korean War.

The North Gyeongsang provincial government has five main inter-Korean economic projects in mind, one of which has to do with linking sea routes between Russia, North and South Korea in order to reduce shipping costs domestic companies are currently paying to trade with Russia. Another project has to do with expanding Youngilman Port in Pohang to develop cruise ship tour packages between Russia, China, Japan and both Koreas, including one that will take participants to North Korea’s Mount Kumgang and Paektu.

On land, North Gyeongsang plans to work with the Ministry of Land, Infrastructure and Transport and the Korea Expressway Corporation to extend a highway running along South Korea’s eastern coast into the North, eventually building a road that will start from Busan and stretch all the way through Europe.

The province also hopes to share its tree-planting know-how with North Korea and create a so-called Korean Peninsula Forest of Hope there, while holding an archery program between North Korea, China and Taiwan, in which archers from all four countries will come together for a friendly match.

Gwangju is pushing to have North Korean officials participate in its upcoming Gwangju Biennale, a contemporary art festival set to kick off in September, and have its archers train alongside their North Korean counterparts. As host of the 18th FINA World Championships 2019, the world championships for aquatics sports, Gwangju wants North Korean swimmers to participate.

Daejeon assigned five government officials to devise ways to cooperate with North Korea in the fields of culture, science, technology and physical fitness.

On history, South Chungcheong hopes to boost cultural cooperation with North Korea in the studies of the Three Kingdoms Period (57 B.C.-A.D. 668). A joint ginseng farm could be proposed for North Korea’s border town of Kaesong and South Chungcheong’s Geumsan County, with the province offering farming technology.