Naver promises a better handling of the news

Naver promises a better handling of the news 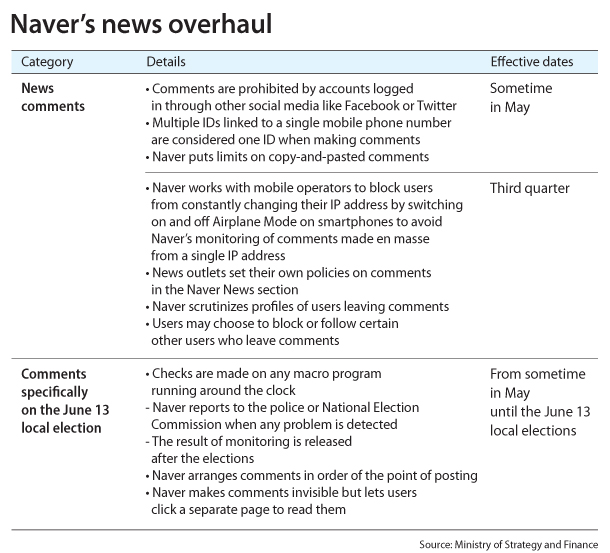 Naver will stop curating articles in its news section, handing over that responsibility to real news outlets starting in the third quarter.

The portal will also remove the news section and lists of most searched keywords from the main page of the Naver app and mobile site.

The company has gradually become a dominant news distribution platform, defined widely as a “quasi-media” corporation, and that has gotten it into trouble. A mushrooming political scandal has shown how Naver allowed users to abuse the comments sections on its news stories and manipulate public opinion for partisan purposes.

Following the overhaul, real media outlets will curate their own stories appearing in a new news section called “News Pan.” Data on readers and advertising revenue will be relayed to each news organization.

The portal will also start a separate news section tentatively named “News Feed,” in which its own artificial intelligence system will recommend news stories from different outlets to individual users.

“We have reached a point at which we can no longer satisfy all users under the current system, which lets over 30 million users read the same news and same real-time searches,” said Naver CEO Han Seong-sook in a press conference at Naver’s Partner Square in southern Seoul Wednesday. “We will find an answer [for our future] with information and technology platforms, our essential services, and leave behind our role in news editing.”

However, Naver fell short of expectations on the issue of directing visitors to a news outlet’s homepage when they click on a story. This is widely referred to as an “outlink system,” which other portals such as Google and Baidu use - but Naver does not.

Han said the company will be “proactive” about introducing the outlink system but did not come up with a detailed timeline.

“I agree with the outlink system in principle,” she said. “It’s hard to apply the outlink system to every news outlet due to varying opinions and situations. But we will discuss with respective news organizations the new system.”

The Seongnam, Gyeonggi-based company currently hosts on its own site stories from selected news outlets and the comments beneath them, which is called an inlink system. It also offers direct links to each news outlet for each story. Users choose between the two options but comments are mostly left on Naver’s news section.

For many users, the 14-year-old comments section makes up a big part of the news experience.

They can argue with other readers and see how many other users like or dislike their opinions.

With an over 72 percent share of the domestic portal market, Naver has 30 million daily average users but there are no statistics on exactly how many visit its news section.

Yoo Bong-seok, executive director of Naver’s media platform, said the company conducted a survey about the new system on 70 news organizations that have stories posted in Naver’s news section.

Only one news outlet agreed to convert to a new arrangement, and half insisted on Naver keeping the right to distribute their news.

The remaining respondents refused to answer.

Rep. Park Sung-joong, a lawmaker with the ruling Democratic Party, said Naver’s plan to introduce the outlink system after discussing it with respective news outlets is a “gimmick.”

“If any single news outlet decides to stay as it is now, others will follow,” said Rep. Park in a statement. “Naver is manipulatively taking advantage of it.”

Rep. Kim Kyung-jin, a lawmaker with the minor opposition People’s Party and a member of the National Assembly’s Science, ICT, Broadcasting, and Communications Committee, said Naver’s “dominance over media” will inevitably persist as long as it maintains the inlink system.

Many called for changes by Naver after a political blogger known by the nickname Druking was found in April to have orchestrated online campaigns in favor of and against President Moon Jae-in by mobilizing an army of allies and macro software.

In response, Naver on April 25 changed the way users can comment on news as June 13 local elections draw near.

Some of the other measures announced on Wednesday, to go into effect starting May at the earliest, were focused on barring parties with political and commercial interests from abusing the comments section.

Users will be prohibited from leaving comments if they are logged onto social media such as Twitter and Facebook, given that the foreign apps do not require verification beyond an email address when signing up.

Naver will also control multiple IDs registered under a single smartphone number, which is meant to prevent users from making waves of comments.

For a limited period from sometime in May until the local elections are held, Naver’s mobile news section will make comments invisible and users will have to click a separate section to read comments. Comments will be listed in order of how recently they were posted and the portal will monitor comments suspected to have been made with macro software.