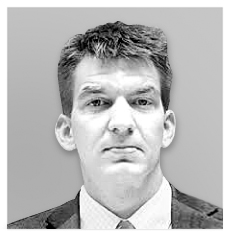 * Matt Laslo
*The author is a veteran congressional reporter and an adjunct professor at Johns Hopkins University and George Washington University.

The use of algorithms to track people’s online movements has generated lots of discussion in Washington in recent days. But while the headlines have focused on Facebook CEO Mark Zuckerberg and just what his platform knows about us, a lesser-known tracking story could prove an even greater threat to the bedrock principles of the nation’s constitutionally mandated free press.

As Zuckerberg argued, no one should rush to judgment while we’re figuring much of this out in real time. However, the early signs are alarming. On April 3, a solicitation on the government web site fedbizopps.gov suggested that the Department of Homeland Security (DHS) is on its own fishing expedition. Only the fish in this case wouldn’t be you, your family and neighbors, they’re hundreds of thousands of news sources: 290,000 to be exact.

DHS is searching for a contractor to build a “Media Monitoring” system with “24/7 access to a password-protected, media influencer database, including journalists, editors, correspondents, social media influencers, bloggers, etc.” so they can “identify any and all media coverage related to the Department of Homeland Security or a particular event.”

This might appear to be standard operating procedure for any business or agency wanting to track media coverage of its activities. However, given President Donald Trump’s hostility toward the media, some media organizations and commentators fear that the database could have a more sinister purpose.

Perhaps ominously, the “statement of work” notes that the successful contractor must have the “ability to export the contact details of the media influencers per media list,” along with “any other information that could be relevant.”

For many, this immediately conjures up the specter of J. Edgar Hoover tapping reporters’ phones. That’s because the FBI chief was notorious for weaponizing the information — including gossip, rumors and secret dossiers — he amassed while maintaining a godlike reign at the bureau for a span of some 40 years. Among those he monitored: Pulitzer Prize-winning reporter David Halberstam.

Hoover’s legacy rightfully lingers in the hearts and minds of many in the nation’s press corps. But this is a new, ever-evolving era of social media, so it seems that government and media watchdog groups need to exercise more caution than the paranoid Hoover ever proved capable of embracing.

The government, just like the rest of us, has mostly free, though never unfettered, access to the nation’s journalists. I’m a reporter, but I’m also a professor in my “free time.” And teaching at George Washington University’s master’s in communications program this semester, I learned, to my surprise, from a guest speaker who showcased her company’s “influencers” database, that my personal information is even available to some high priced media-focused clients.

So if some lobbyist can pay to find my personal data, then surely the government should be able to track me as well as any stories of mine that deal with national security. That would be easy to swallow for the press corps and other opponents of this newly hatched, or at least newly reported, plan — if only the track record of the Trump administration was different. But it’s not.

Before he entered the White House, Trump himself called for reinstating some version of the Alien and Sedition Acts of 1798, which played a key role in limiting the nation’s second president, John Adams, to an embarrassing single term.

Like Adams, Trump’s calls for curtailing the expansive gravitas of the First Amendment didn’t stop on the trail. In the White House, Trump has embraced the rhetorical atom bombs dropped by his former chief strategist and alt-right-whisperer Steve Bannon, who dubbed the press corps “the enemy.” The president has gone a step further, and has continuously called for overhauling the nation’s libel laws so that it’s easier to sue reporters over disagreeable, even if true, stories.

Vice President Mike Pence also brings baggage with him on the topic of the free press. While governor of Indiana, he tried to start a state-run news, well, propaganda really, agency that was stopped in its tracks when details of the crackpot plan emerged.

Maybe if Trump and his alt-right minions toned down their rhetoric and stopped painting the media as their perpetual enemy, then it would be easier for journalists to accept the government’s desire to update its systems to meet the demands of being politically engaged in this social media era.

The innate tension in this case is that the federal government needs to update all of its electronic systems in this hyper-connected time period, while the current administration has only sown discord in the fabric of today’s new social compact. Like Facebook, it needs to renew that trust before the press corps and the public can trust that J. Edgar Hoover truly remains in his grave in Washington’s Congressional cemetery.

Until that faith is restored — or even established — it will be hard for many people to stomach a federal government whose chief decries his press coverage and attempts to undercut and sow discord between the public and the nation’s journalists. Until Trump truly embraces the First Amendment and the vital role the Fourth Estate plays in the United States, there’s really no reason any thinking journalist would want this administration to track them that closely.

Right now, most of us likely trust Zuckerberg and Facebook with our vital information more than Trump and his administration. And believe me, many of us are dubious of Facebook and have our privacy settings fine-tuned on that platform. It’d be a shame if we all went in digital hiding knowing that the government is on a libel hunt. But only one person can change that trend. And his last name doesn’t start with a Z.