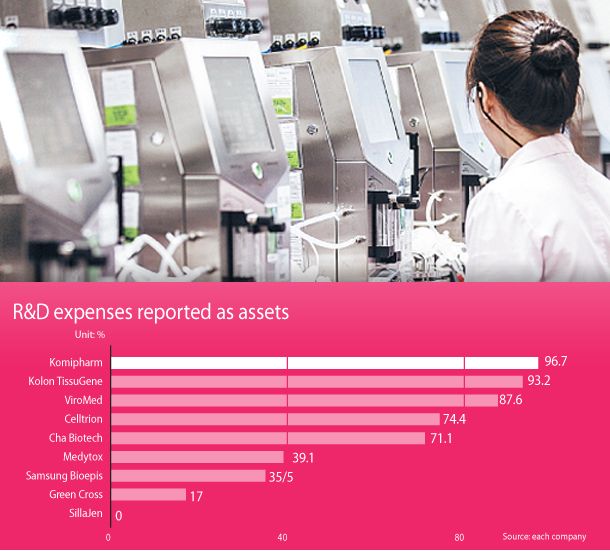 After the Financial Supervisory Service accused Samsung BioLogics of accounting fraud last month, the Korean pharmaceutical industry has been wracked by concerns over whether other companies will be hit as well.

Samsung BioLogics shares have been falling since the end of last month. While they rebounded slightly on Wednesday, the price quickly turned around on Thursday, closing 2.14 percent lower than the previous day. Other biopharmaceutical companies’ shares have been suffering from the same fate, leading the government to acknowledge that it should have taken a more cautious approach to its investigation into Samsung BioLogics.

The financial authorities’ premature announcement of the biopharmaceutical company’s alleged accounting fraud was the primary source of recent market anxiety. However, some in the industry see the recent situation as a conflict created from the FSS’s transition to categorizing R&D expenses as part of companies’ accounting.

At the end of last year, the FSS announced its plan to inspect the expenses of drugs in unclear stages of research and development, saying that companies count them as tangible assets too often, creating the potential for accounting fraud.

The FSS conducted inspections since January of 10 biopharmaceutical companies, which likely included major companies such as Celltrion.

The FSS did not disclose the names of the companies it inspected.

Because of these investigations, the shares of other biopharmaceutical companies have been falling, as it is unclear who will be the next target after Samsung BioLogics.

The biopharmaceutical companies claimed that they have done nothing wrong and that they followed international standards that claim R&D expenses as assets.

The international standard that Korea has chosen, K-IFRS, suggests conditions for treating R&D expenses as assets. These conditions take into account the possibility to actually bring a product to the market, the company’s ability to sell it and its future economic impact.

Older companies generally put the expenses down as costs, while new companies put down the same expenses as assets.

Celltrion, which specializes in developing biosimilar drugs, listed 74.4 percent of the 227 billion won ($212 million) it spent on R&D as assets. The traditional drug company Yuhan put down all of the 103.6 billion won it spent on research and development as costs.

Biopharmaceutical company Green Cross said that 17 percent of its 116.5 billion won in R&D expenses were assets.

“The R&D process between companies that develop new drugs, which synthesize chemicals without a specific blueprint, and those that make biosimilars, which are based on patented drugs that have a blueprint, is different,” said a Celltrion official. “Because [biosimilars] have a higher possibility of being realized, there’s no problem in putting down expenses as assets on the accounting books.”

An industry insider said the government should not apply the same standards as global pharmaceutical companies to Korean biosimilar companies, adding that Korea leads in the biosimilar field.

“Global drug companies only put expenses as assets after the government approves the sales of the drug, as the development of drugs is always uncertain,” said a FSS official. “In the case of Korean companies, we found cases where they already put drugs down as assets even when they are on trial runs.”

Some are worried that the FSS’ move against Samsung BioLogics could have a negative impact on the industry itself.

“The research and development of new drugs will inevitably shrink if they are forced to list most of their R&D expenses as costs,” said an industry official.

“Global companies spend several trillion won on R&D, but in the case of Korean companies, their biggest investment is around 200 billion won,” said another industry official. “Forcing R&D expenses to be listed as costs goes against the government’s policy of fostering the biopharmaceutical industry as a future growth engine.”

Local biopharmaceutical companies’ R&D expenses have been rising every year.

Last year, the R&D spending of the top 10 local biopharmaceutical companies exceeded 1 trillion won for the first time. In 2016 it was 973 billion won.

The top spender was Celltrion, which spent 227 billion won, followed by Hanmi Pharmaceutical at 170.6 billion won and Green Cross with 116.5 billion won.

Experts say the government needs to quickly clarify whether R&D expenses should be considered assets to minimize the confusion that is clouding the market.

“Because each company’s technology level and management are different, it’s hard to generalize R&D expenses in accounting,” said Hwang Mun-ho, an accounting professor at Kyung Hee University. “Yet the FSS, in starting the inspections, should come up with guidelines as soon as possible to reduce confusion.”

Yoon So-ra, an Ajou University professor of business management, said that the subject is a hot topic among scholars.

“The basic principle of international accounting standards is to allow companies to make their own judgment while minimizing the intervention of the government,” Yoon said.