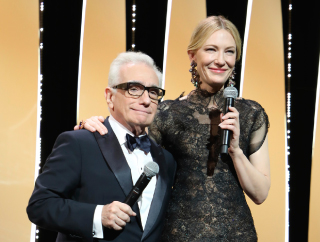 CANNES, France - Forty-four years after his Cannes Film Festival debut, “Mean Streets,” Martin Scorsese returned to the Croisette Wednesday to recall his breakthrough film, one he said he only understood years later.

A day after declaring open the 71st Cannes with jury president Cate Blanchett, Scorsese joined a post-screening conversation for “Mean Streets,” which played in Cannes’ Directors Fortnight section in 1974.

“This was the first time for me at Cannes,” said Scorsese. “And it was almost the best because of anonymity and trying very hard to change that.”

“Mean Streets,” of course, helped establish Scorsese, who then had two features under his belt (“Who’s That Knocking on My Door” and “Boxcar Bertha”). Two years after “Mean Streets” landed in Cannes, Scorsese’s “Taxi Driver” would win the Palme d’Or despite booing at its premiere and the reported apprehensions of jury president Tennessee Williams.

And “Mean Streets,” about two Catholic brothers in a violent, gangster-controlled Little Italy, remains one of Scorsese’s most personal films.

“Most of ‘Mean Streets’ took me years to really understand even though a lot of the film was what I was living at that time in the early ’60s,” said Scorsese. “It took me years to really understand it’s about my father and his youngest brother. Until the day they died - and his youngest brother died only a few months after him - my father was still doing favors, as they said. My mother said, ‘Don’t do it!’ He was always in trouble. He was always in and out of jail, but I loved him.”

“Melodrama was to us drama,” said the 75-year-old filmmaker. “This was a daily occurrence. Philosophical and moral discussions with serious consequences.”

“Mean Streets,” he said is ultimately about the question of: “How does one lead a moral life in a world that is not?”

The screening prompted Scorsese to speak about an influential priest, a “street teacher” to him between the ages 11 to 17.

“He was the one who made me realize that we have to go for more,” said Scorsese. “I explore this concept of love and compassion in life. I had to do it because the other alternative was violence and murder. I mean, that’s what I think, what I saw around me. The only hope would be to find that in yourself, to be able to deal with others that way.”

Scorsese this spring finished shooting his gangster epic “The Irishman,” a big-budget release for Netflix that teams him back up with De Niro and Al Pacino. Scorsese noted the film’s scope, saying it contains nearly 300 scenes, but didn’t wade into the ongoing disagreement between Cannes and Netflix. The festival has barred films without theatrical distribution from its prestigious competition lineup. Netflix in turn withdrew its releases entirely from this year’s festival. AP