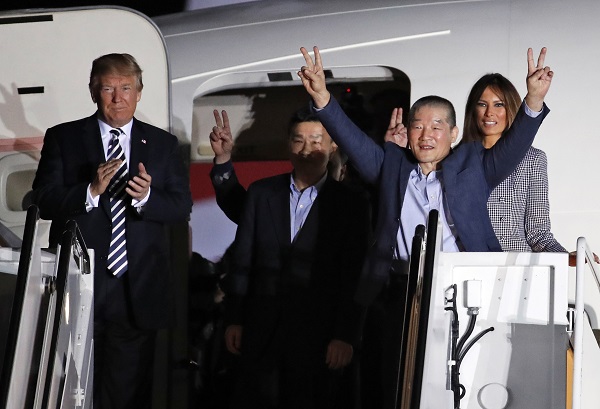 U.S. President Donald Trump, left, applauds as U.S. detainee Kim Dong-chul, second from right, gestures upon his return with Kim Hak-song, behind, and Tony Kim, second from left, after they were released by North Korea, at Joint Base Andrews in Maryland on Thursday. [AP/YONHAP]

U.S. President Donald Trump greeted in person three Korean-American detainees released by North Korea as they landed at Joint Base Andrews in Maryland in the dead of the night, underscoring that their release was a step toward denuclearization of the Korean Peninsula.

“This is a special night for these three really great people,” said Trump as he welcomed the detainees at the military base just outside Washington upon their arrival around 3 a.m. Thursday after Secretary of State Mike Pompeo’s secured their release from Pyongyang the previous day.

Trump and the first lady, Melania Trump, entered the plane to speak with the detainees first, and when the president emerged from the plane with them, they were greeted by applause from the media and bystanders. No family members of the detainees were present at the base.

“The fact that we were able to get them out so soon is a brilliant attribute to a lot of things, including a certain process that’s taking place right now,” said Trump to the press. “And that process is very important.”

The president went on to recognize the weight of his upcoming summit with North Korean leader Kim Jong-un, and continued, “My proudest achievement will be - this is a part of it - when we denuclearize that entire peninsula. This is what people have been waiting for, for a long time. Nobody thought we could be on this track in terms of speed.”

He added Washington had a “very good chance of doing something very meaningful.”

“I’m very honored to have helped the three folks,” he said, adding that he had a chance to talk with them on the plane. “This is a special night for these three really great people and congratulations on being in this country.”

One of the released detainees, Kim Dong-chul, said, “It’s like a dream, and we are very, very happy.”

He added that he had many experiences and he had been forced to do a lot of labor during his detention in North Korea, but also received medical treatment when he fell sick.

The three detainees were released on amnesty following Pompeo’s second visit to Pyongyang within the past two months on Wednesday, during which the top U.S. diplomat met with North Korean leader Kim Jong-un and senior officials. Their repatriation has been seen as a goodwill gesture ahead of the upcoming North Korea-U.S. summit.

Trump soon after confirmed the release of the three detainees himself over Twitter, as they were en route to the United States with Pompeo, stating they “seem to be in good health” and that he planned to greet them at the base when they arrived.

Tony Kim, also known as Kim Sang-duk, and Kim Hak-song were arrested in North Korea in 2017 on charges of “hostile acts.”

Tony Kim taught briefly at the private Pyongyang University of Science and Technology (PUST) and was detained in April 2017 and later accused of attempting to overthrow the North Korean government.

Kim Hak-song, an ethnic Korean born in Jilin, China, later became a naturalized U.S. citizen. He was an agriculture expert who was a professor at the same university and was detained in May 2017.

In 2015, Kim Dong-chul, a Virginia-based minister and businessman, was arrested and charged with espionage and attempts to subvert the state and sentenced to 10 years of hard labor in 2016.

Trump, while welcoming the released detainees, took a moment to pay respect to the family of Otto Warmbier, the American student who was jailed in North Korea and died last June after he was released in a vegetative state.

On North Korean leader Kim, Trump added, “I really think he wants to do something and bring that country into the real world. I really believe that.”

Trump pointed out that he appreciated Kim allowing the release of detainees ahead of their summit, adding, “It’s a very important thing to all of us.”

He added on his upcoming summit with Kim, “I think this is going to be a very big success. It’s never been taken this far” and “never been a relationship like this.”

He did not clarify the location or date for his summit with the North Korean leader.

Trump continued, “We’re starting from here. But I really think a lot of progress has been made. We’re talking about a few weeks. Some great things can happen.”

He also complimented Pompeo, adding he “has done a fantastic job.”

Trump also took a moment to joke to the press, remarking, “I think you probably broke the all-time in history television rating for three o’clock in the morning.”

The detainees were taken to a nearby hospital for medical checkups.

The detainees’ release was immediately welcomed by the Blue House, and South Korea’s Ministry of Foreign Affairs put out a statement saying their “release is expected to help to foster a positive mood for the success of the U.S.-North Korea summit talks.”