Seventeen to open an exhibition for its fans

Seventeen to open an exhibition for its fans 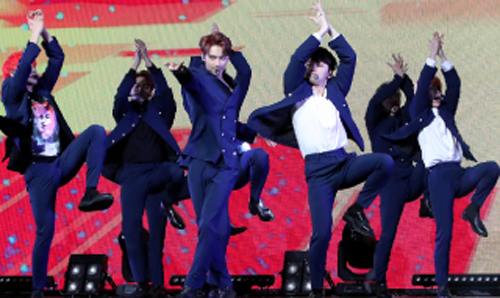 Boy band Seventeen will hold an exhibition to express thanks to its fans on its third anniversary.

The 13-member group will open the exhibition titled “17’s Cut” at Teamwork Design in eastern Seoul on May 26, the anniversary of its debut in 2015, Pledis Entertainment said. The event will last until June 3.

Debuting with its first EP, “17 Carat,” Seventeen has since released hit songs such as “Very Nice,” “Don’t Wanna Cry,” “Clap” and “Thanks.”

The band won a special episode of KBS2’s singing competition program “Immortal Songs,” broadcast on May 5, for a rearranged version of legendary Korean pop singer Cho Yong-pil’s “Short Hair.” Following the appearance, the boys were chosen to open Cho’s 50th anniversary concert at Jamsil Stadium in southern Seoul on Saturday.

On May 30, the group will drop its debut Japanese album, “We Make You.” Yonhap