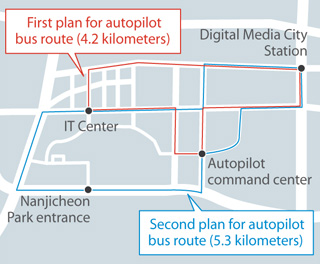 For residents of Digital Media City (DMC) in western Seoul, bus drivers might soon become a thing of the past.

Free driverless buses will run in a designated area of DMC in Sangam-dong, Mapo District, starting in the latter half of next year at the earliest. The buses are part of a government plan to expand autonomous transportation to areas that are poorly served by public transit.

The Ministry of Land, Infrastructure and Transport and the Seoul Metropolitan Government said on Sunday they will work together to form a test area for self-driving buses centered around Digital Media City station on Seoul Metro line No. 6.

The driverless buses will drive on a route between major locations within Digital Media City (DMC) three to four times a day.

The government chose DMC for its varying road conditions, including tunnels and roundabouts, that make experiments with advanced autopilot services possible.

Should the pilot project succeed, the Seoul government will consider commercializing driverless public transportation, enabling people living in far-flung areas to hail a bus when they need one.

The ministry will focus on road infrastructure to accommodate the driverless vehicles.

It plans to install closed-circuit televisions at every crossroads and sensors that can detect and alert pedestrians at blind spots. A central autopilot command center will monitor real-time road conditions.

Seoul’s city government will also allow telecom operators to install next-generation 5G networks within the area to experiment with using advanced telecommunication networks to connect vehicles with other vehicles as well as land and communication infrastructure.

This connection will complement the limited performance of sensors and monitoring cameras.

This 5G network for connected driverless vehicles will come in two varieties. One that is set to be installed this year is wireless access in vehicular environments, a 14-year-old standard set by the Institute of Electrical and Electronics Engineers in the United States. Cellular vehicle to everything, a technology developed by the Third Generation Partnership Project, a group of telecommunications standards associations, will be established next year.

Seoul will also allow autopilot technology developers to operate their vehicles by restricting some roads within the area during hours with less traffic.

“The country’s autopilot technologies will take one step forward thanks to the experimental area [in DMC],” said a Land Ministry official.

Outside of Seoul, Daegu and Pangyo, Gyeonggi, are also working to establish test areas for autonomous vehicles.