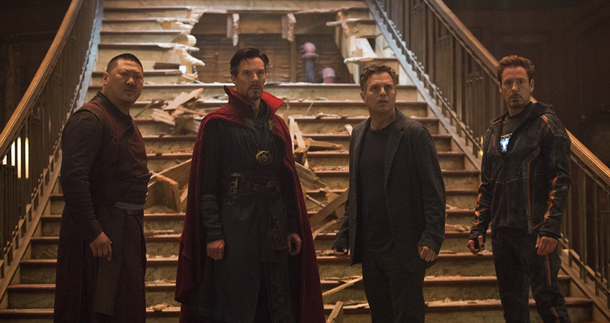 “Avengers: Infinity War” continues to rule box offices in its third weekend in both Korean and North American theaters, easily beating out the weekend’s new releases.

Marvel’s latest, starring 23 of its superheroes, easily topped the local box office, selling 783,000 tickets at 1,601 screens from Friday to Sunday, accounting for 56.8 percent of ticket sales in its third weekend.

There is nothing surprising about Marvel’s latest performance in Korea, considering it sold 95.1 percent of weekend ticket sales during its first weekend in theaters.

In North America, Walt Disney Studios estimated on Sunday that “Infinity War” has added $61.8 million from North American theaters, bringing its total domestic earnings to $547.8 million. Globally the film has now grossed over $1.6 billion - $200 million of which was from its massive opening in China this weekend. It’s now the fifth-highest grossing film of all time worldwide.

In a distant second at the Korean box office was “Love+Sling,” which sold 366,000 tickets in its debut weekend. Starring Yoo Hae-jin and Kim Min-jae, the comedy revolves around a former member of the national wrestling team named Gwi-bo (Yoo) who dreams of raising a gold medalist. His son, Seong-ung (Kim), is a promising wrestler. The family movie explores the relationship of a parent and a child through athletics.

Another sports movie, “Champion,” came in third, down one spot from the previous weekend. Selling 137,000 admissions over the three days, the film has sold a total of 1.07 million tickets since its arrival on May 1.

Starring Ma Dong-seok, the movie revolves around a former arm wrestling champion who gets another chance to clinch the trophy. Actors Kwon Yul and Han Ye-ri co-star as the arm wrestler’s sly sports agent and the sister that he only recently met.

In North America, newcomers like Melissa McCarthy comedy “Life of the Party” and the Gabrielle Union thriller “Breaking In,” both of which were strategically timed to debut on Mother’s Day weekend, took the second and third place spots. Both films drew overwhelmingly female audiences.

In a distant second, “Life of the Party” earned an estimated $18.5 million, which is a few million short of some of McCarthy’s other comedy collaborations with husband Ben Falcone like “Tammy” and “The Boss.” The Warner Bros. release stars McCarthy as a woman who decides to go back to college with her daughter.

The studio is “thrilled” with the results.

The modestly budgeted “Breaking In” took third place with $16.5 million, over-performing most industry expectations despite lackluster reviews. The film stars Union as a mom who has to fight to save her kids from a group of home invaders.