Freeze at the National Assembly thaws a bit

Freeze at the National Assembly thaws a bit 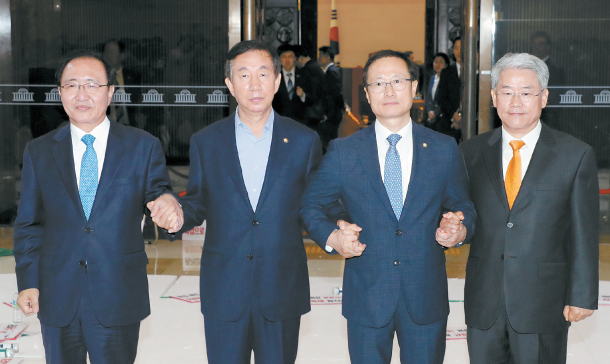 Ruling and opposition parties reached agreement Monday to temporarily end a standoff at the National Assembly to process the resignation of four lawmakers running in local elections and to pass bills on an independent counsel probe into a public opinion manipulation scandal and a supplementary budget bill.

The assembly has been paralyzed due to fighting among the parties over the public opinion manipulation for and against President Moon Jae-in, which involves a political blogger known as Druking and Democratic Party Rep. Kim Kyoung-soo.

Monday was the last day that four incumbent lawmakers’ resignations could be processed, allowing them to run in local elections. The law stipulates incumbent representatives must resign from their posts 30 days before running in local elections, which will be held on June 13.

For Kim’s resignation to be processed, it required a vote of more than half of the members of the Assembly, or 147 out of 292. The Assembly had not voted on the resignation as of press time Monday. Kim, a confidant of Moon, was found to have exchanged text messages with the blogger during last year’s presidential election, possibly directing him to manipulate public opinion in favor of Moon. Kim’s former aide was found to have received money from Druking’s group, suspected to be a bribe in exchange for a political favor.

The opposition has been demanding an independent counsel probe into the alleged public manipulation campaign, demanding an investigation into both the political blogger and DP Rep. Kim. The ruling DP wants the probe to only investigate what the political blogger is formally charged with, which is using a software program to rig “likes” on certain political comments criticizing the Moon administration’s decision to form an inter-Korean ice hockey team in the PyeongChang Winter Olympics in January.

Earlier in the day, floor leaders and Assembly Speaker Chung Sye-kyun met to try to reach a compromise on the case.

“The Democratic Party must say yes to the independent counsel probe bill,” said the main opposition Liberty Korea Party floor leader Kim Sung-tae on Monday morning. “But it seems they are not ready to back down on this.”

“The independent counsel probe would not be about finding out the truth,” said the DP floor leader Rep. Hong Young-pyo on Sunday. “It would be a tool to worsen inter-party conflict. If the probe’s purpose is to question the outcome of the presidential election, then it would be hard to agree to it.”

LKP floor leader Kim, DP floor leader Hong and speaker Chung adjourned the meeting and held another one in the afternoon, emerging at around 6:45 p.m. with the agreement to pass the bills on an independent counsel probe and supplementary budget on Friday.

BY ESTHER CHUNG, AN HYO-SEONG [chung.juhee@joongang.co.kr]