North's former U.K. envoy says it won't give up all nukes

North's former U.K. envoy says it won't give up all nukes 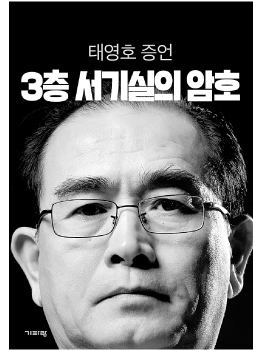 The cover of “The Secret Code of the Three-Story Secretariat Office: Thae Yong-ho’s Testimony” [YONHAP]

North Korea will never give up its nuclear weapons, and will only downsize its stockpile, said Thae Yong-ho, Pyongyang’s former deputy ambassador to the United Kingdom, who defected to South Korea in 2016.

Thae made the remark during a press conference on Monday at the National Assembly in Yeouido, western Seoul, to mark the release of his first book.

Thae, who arrived in South Korea with his wife and two sons in the summer of 2016 from the U.K. via a still-undisclosed route, said it was wishful thinking to believe North Korean leader Kim Jong-un would carry out complete, verifiable and irreversible denuclearization, also known as “CVID,” in compliance with demands from South Korea and the United States.

“That miracle won’t happen,” said Thae, who currently works as an adviser to the Institute for National Security Strategy, a state-backed organization affiliated with the National Intelligence Service, South Korea’s spy agency.

At most, North Korea would agree to SVID, he said, adding that the “S” stands for “sufficient.” Under this scenario, Pyongyang would downsize its nuclear stockpile but still hold on to its nuclear program, becoming a “nuclear power wrapped around paper called ‘denuclearization.’”

“I can’t make any rash pre-judgements, but I think the most realistic solution [to the North Korea nuclear crisis] would be to have the North agreeing to reducing its nuclear threat,” said Thae.

There is only month left before Kim meets U.S. President Donald Trump on June 12 in Singapore for a historic summit between the two countries.

Thae said that Kim wouldn’t agree to CVID because the process requires unlimited inspection from international agencies, and allowing that would be a critical blow to the “core foundation” of the North Korean power structure that revolves around its supreme leader.

The former diplomat also cast doubt on the Panmunjom Declaration signed by Kim and South Korea’s President Moon Jae-in on April 27. He said the idea of connecting both Koreas and Russia by a railroad along the eastern side of the Korean Peninsula would require huge expenditures by Seoul and Moscow, because both countries will have to pay Pyongyang to relocate all its military bases along that passage.

Thae argued that Pyongyang has a history of driving wedges between countries while holding summits. He cited the North’s recent snub of Japan, which was the only country among the six-party nations whose reporters weren’t invited by North Korea to observe the demolition of the Punggye-ri nuclear test site from May 23 to 25. By not inviting Japanese reporters, Thae said Pyongyang was perhaps trying to damage the alliance between Seoul, Tokyo and Washington because it found it hard to deal with all of them together.

Thae said that reporters from the United Kingdom were probably invited to the Punggye-ri demolition event because North Korea witnessed the U.K.’s pivotal role in international society when the United States tried to gain global support before staging its military interventions in Libya in 2011 and Iraq in 2003.