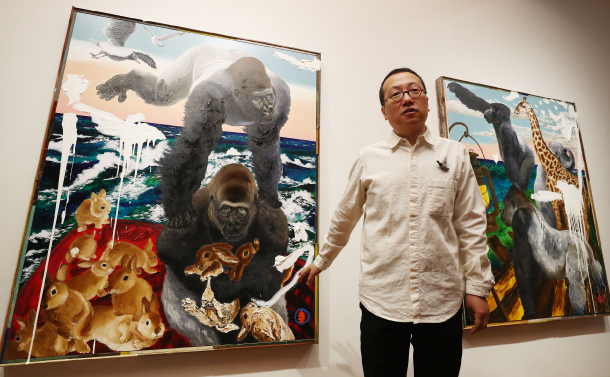 Artist Sa Suk-won explains his new paintings during a preview of his solo show at Gana Art Center in Pyeongchang-dong, central Seoul. The exhibition starts on Friday. [YONHAP]

A silverback gorilla stands precariously on a single rope, holding three smaller animals tight to his chest. Underneath, waves are raging furiously. A leopard bites the head of a crocodile in a boat as if to show the rule of the jungle.

The painting with the unlikely title of “Flower,” its creator Sa Suk-won said, is dedicated to all the fathers in the world who sacrifice themselves to protect their families. However uncertain and perilous situations they are in, fathers accept their fate - that they have families to look after, mouths to feed.

“I think it is beautiful like flowers,” he added.

The painter is known for his delicate expression of animals. In his first solo exhibition in three years, titled “Hope Scribbles,” he used various animals - gorillas, rabbits, donkeys, tigers and elephants to name a few - to describe the subject of youthful aspiration, as well as desperation and strong fatherhood.

At a media preview Monday, the artist, 59, said that his father’s sickness, which has caused him to be bedridden for the last five years and not be able to recognize his own son due to Alzheimer’s disease, made him ruminate over his own life as a middle-aged man.

“I am also aging and getting weak. I began to wonder how long I can remain healthy. I felt like I was losing my identity, and I was in desperate need of a drive to encourage me again,” he said.

“I looked back and recalled how energetic I was when I was young. This exhibition is asking my younger self how to lead my life.”

The artist majored in oriental painting at Dongguk University in Seoul and got his master’s degree in primitive art at the graduate school of the University in Paris VIII.

After he returned to Korea, he expanded the usage of materials to oil paints, of which strong colors reminded him of the persistent life force.

He doesn’t use a palette but squeezes paints directly onto the canvas, and uses a slender and soft brush, used in oriental painting, to make a solid effect, as well as to mix Western art and the Korean traditional one.

He used to leave a chunk of thick paints on the canvas, but he has been trying a new style of smudging them, leaving a trail behind and creating blurry effects.

“The new trial demonstrates my aspirations for hope and a new start. I used to hold onto every detail, but now is time to start to remove and let things go.”

In an artist note that accompanies the photo of his younger self, he wrote: “A rainbow is beautiful as it doesn’t last long. A festival of colors ends, leaving behind an empty space. No more fire in my heart. The sun lies down on the horizon. My youth rode on the back of a donkey and disappeared. I asked myself, ‘Are you an adult? What is your life like?’”

The exhibition with some 40 pieces of paintings is set to open at Gana Art Center in Seoul on Friday and run through June 10.