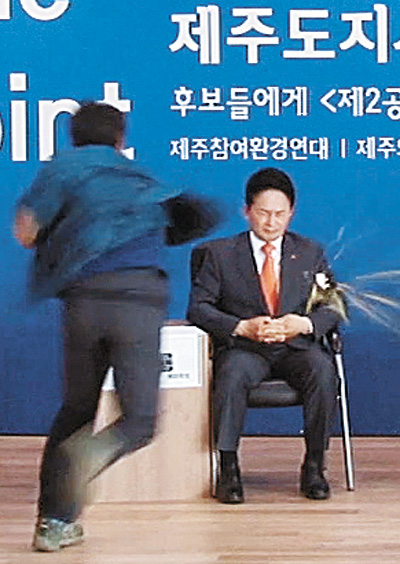 A protester throws an egg at Jeju Gov. Won Hee-ryong during a debate at Jeju Techno Park on Monday. The protester is part of a group opposing the construction of a new airport on the island. [YONHAP]

The daughter of a governor seeking re-election is under fire for threatening comments she made on Facebook after her father was assaulted by a protester during a candidates’ debate on Monday.

Won Hee-ryong, the incumbent governor of Jeju, was explaining his position on the construction of a new airport on the island when a protester opposed to the construction ran onstage, threw a raw egg at Won and slapped him across the face.

He was then taken off the stage by the moderator, Kim Dong-hyun, and Democratic Party candidate Moon Dae-rim, who was sitting to Won’s left.

The next day, Won’s daughter defended him in a letter. On her Facebook page, she also left an expletive-laden post that suggested she would take revenge on his assailants “with eggs and a knife.” The post was quickly deleted, but Won’s campaign headquarters said it would look into it.

Won is running as an independent after leaving the center-right Bareunmirae Party in April. He supports the construction of a new airport on Jeju Island, arguing that the existing airport has reached its maximum capacity and cannot support the massive influx of tourists from abroad, especially from China.

Located off Korea’s southwestern coast, Jeju is the country’s largest island and a popular vacation spot. Its local economy is heavily dependent on tourism.

The protester, a resident of the area selected for the new airport, is part of a civic group opposing its construction. The group argues that the higher tourist traffic will further damage Jeju’s local culture and heritage. They believe the island’s tourism business is oversaturated.

In a statement, Won said he did not wish punishment for his assailant, saying he understood the protester’s sentiment and motive. His campaign, however, has called it “an act of political terror.”

The day after the attack, a letter signed by Won’s daughter appeared on the governor’s Facebook page. In it, she expressed anger at claims that Won’s assault was faked to gain sympathy and questioned why her father would remain in politics with such treatment.

“You can vote against him or insult him all you want,” she wrote. “I don’t care about that. The only thing I ask for is that you don’t hurt his body.”

One line in the letter has been scrutinized for its eyebrow-raising candor. “The first thing that came to my mind when I heard about the attack was that I only wish for a good death for my father,” she wrote.

In Korea, the expression “a good death” is mostly used as a eulogy for those who have died at an advanced age.

The daughter’s comment was seen as highly unusual and inappropriate in the eyes of many people. The letter was soon deleted after generating intense criticism on the internet.