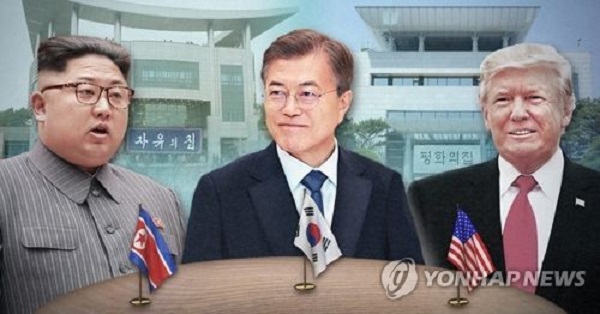 North Korea called off a planned high-level meeting with South Korea early today, just hours before it was to take place at the border village of Panmunjom, blaming Seoul’s ongoing joint drill with Washington as an “undisguised challenge” to the inter-Korean declaration signed at the South-North summit last month.

According to South Korea’s Unification Ministry, which handles relations with the North, Pyongyang informed Seoul at 12:30 a.m. today that it would “indefinitely suspend” the high-level meeting due to South Korea’s Max Thunder air force training exercise with the United States.

The joint drill, which kicked off last Friday, usually lasts two weeks and has been held annually since 2009.

North Korea also threatened to walk out of its first summit with the United States, slated for June 12 in Singapore.

In an English report issued by its official mouthpiece, the Korean Central News Agency (KCNA), North Korea said the U.S. will “have to think twice about the fate of the DPRK-U.S. summit” before raging a “provocative military racket” against the North “in league with south Korean authorities.” DPRK is the acronym for North Korea’s official name, the Democratic People’s Republic of Korea.

“We will closely watch the ensuing behavior” of Seoul and Washington, the report continued.

On the high-level meeting between Seoul, the KCNA said the South Korean government should be held “wholly accountable” for its scuttling of the talks, as well as the “difficulties and obstacles in the way of the north-south relations.”

The fact that Seoul has pushed through with Max Thunder, said the KCNA, was a violation of the Panmunjom Declaration, signed between South Korean President Moon Jae-in and North Korean leader Kim Jong-un, because both leaders agreed on April 27 to usher a “new peace era” and make joint efforts to defuse military tensions on the Korean Peninsula and ease the danger of war.

A senior official at the Blue House said local authorities were trying to understand Pyongyang’s intentions. An official statement from the South Korean government is expected to be released in the coming hours.

A high-level meeting between the two Koreas was planned to take place today at the Peace House, a South Korean-controlled building in Panmunjom, where both their leaders held a landmark summit on April 27. The South’s Unification Ministry said the meeting was intended to discuss ways to implement agreements made in the Panmunjom Declaration.

South Korean officials initially proposed to the North last week that they hold the high-level meeting on Monday, but the North suggested yesterday that they hold the meeting today, the Unification Ministry said. The ministry did not provide an explanation for the delay.

North Korea had informed the South that it would send five officials to the high-level meeting today, along with 24 others, including support staff, aides and reporters. The 29-member delegation was supposed to be led by Ri Son-gwon, chairman of the Committee for the Peaceful Reunification of the Country of the DPRK, a cabinet-level organization within the North Korean government in charge of relations with South Korea.

The four other North Korean officials planned to join the talks were Kim Yun-hyok, vice minister of railways; Won Kil-u, vice minister of physical culture and sports; Pak Yong-il, vice chairman of the Committee for the Peaceful Reunification of the Country of the DPRK; and Pak Myong-chol, vice chairman of the National Economic Cooperation Committee, a cabinet-level agency overseeing South-North economic cooperation.

The South’s Unification Ministry said its five-member team of negotiators would be led by Unification Minister Cho Myoung-gyon and include four other high-level government officials from the ministries of unification; land, infrastructure and transport; culture, sports and tourism; as well as the Korea Forest Service.