Belying their stylish demeanor, the brand’s cars are also famous for their go-kart handling. Despite looking cute, the vehicles can actually pull off dynamic off-road courses with all-wheel drive and strong suspension. 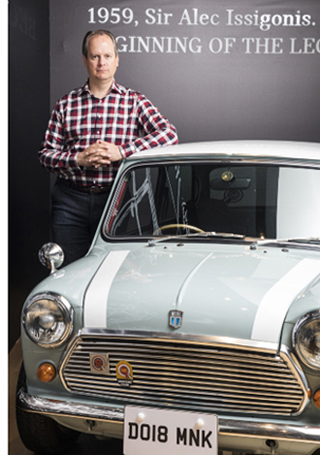 Mini has recently attempted to mix things up once again, adding an electric powertrain to its lineup. The electric version of the Mini will launch globally next year and is scheduled to arrive in Korea by 2020. Mini isn’t focusing on beating the competition when it comes to range, but instead looking to produce an attractive vehicle that is true to its brand and comes with all the bells and whistles packed into the current lineup.

“We want to stay modern while keeping the past,” said Sebastian Mackensen, a senior vice president of the Mini brand, in an exclusive interview with the Korea JoongAng Daily on May 11 at the BMW Driving Center in Yeongjong Island, Incheon.

“When you work with an emotional brand like Mini, you have to keep the heritage. It is not a brand that needs to experiment,” he added.

The one-off electric version of the classic Mini unveiled in March this year represents the brand’s new direction for its eco-friendly lineup - Mini will go eco-friendly, but it will not sacrifice its core identity.

Although a latecomer in the market, Mackensen says the electric version of the Mini will stay competitive because of its suitability for urban driving.

“For Mini, it is a fantastic situation because we are the most urban premium car brand,” he said. “Electric mobility will be relevant more in urban driving. We feel [it is] natural to make an electric car to make us complete,” he added.

The introduction of the electric powertrain, however, will not bring radical changes to the brand’s legacy including the design or the driving experience.

“I actually think the electric powertrain will even enhance the go-kart feeling,” the executive said. “Because you have a lower center of gravity, which is always important for the driver to handle the car. … Also, you will have dynamic torque,” he added.

According to some industry experts, there are certain design elements that are often spotted on electric cars - slim headlights and sleek sidelines, for example. These design points have become the hallmark of electric cars - an attempt to make them look more high-tech. Mackensen isn’t convinced.

“There is no reason to change [the design] just because there is different technology under the sheet metal,” Mackensen said. “It impacts the exhaust pipe because you don’t need them, but the round-shape headlight and the cockpit, that is not dependent on whether it is gasoline, diesel or electric,” he added.

Although Mini is currently working on getting the right balance between battery space, weight and cost to figure out the soon-to-launch electric car’s driving range and price, Mackensen is confident it will be a “useful first car,” instead of the fancy second car that many first-generation electric cars end up becoming.

“This year, we wanted to put extra focus on the Asian market and we did the first edition in Korea,” Mackensen said.

The Mini brand in Korea has shown healthy growth for the past few years.

Last year, it sold a record-breaking 9,562 units in Korea, posting a 10.8 percent year-on-year growth. Korea has been the ninth-biggest Mini market in the world for the last three years.

“I think Korea is a special market because it has an above-average percentage of bigger cars,” he said. “Actually in recent years [in Korea], the small car segment didn’t develop as much but this didn’t keep us from still growing,” he added.

The trend-sensitive and tech-savvy aspects of the Korean market will also keep the Mini headquarters closely monitoring the auto industry here. BMW Group, the mother company of Mini, has five global R&D centers outside its Germany headquarters and one of them is located in Korea.

“Why? Because we are aware that things are happening here and we want to keep our finger on the pulse of Korea to be able to incorporate that,” Mackensen said.

Mackensen joined Mini in 2013 as vice president of the sales department. Since 2015, the 47-year-old has been working as the brand’s senior vice president. Before joining the BMW Group, Mackensen worked for multiple premium car brands including Porsche and Audi.