At this school, class is one on one

At this school, class is one on one 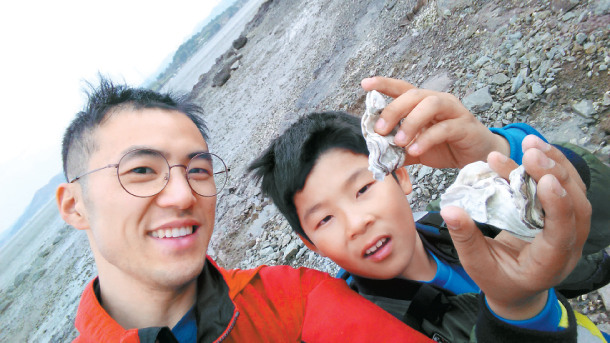 Kim Seong-hyun, the only teacher on Jang Island in South Jeolla, and his only pupil, Kim E-gun, conduct class on a mud flat. [KIM SEONG-HYUN]

BOSEONG COUNTY, South Jeolla — Just a few kilometers off the coast of this region famous for its green tea, there is an island with only one school, one teacher and one student.

Most of the 300 residents of Jang Island, about 4 kilometers (2.5 miles) southeast of Beolgyo-eup, a town on the mainland, are in their 70s. The school’s only student is 12-year-old Kim E-gun, a sixth grader. His teacher is Kim Seong-hyun, who was assigned to the island school last March.

E-gun begins his day like any other elementary school student in Korea. He rides his bike to school and starts class at 9 a.m. Each class lasts 40 minutes with a 10-minute break in between. All the sessions are one on one.
When it’s time for lunch, the two head to the cafeteria together. “I have to play the role of the school’s nutritionist and cook,” said Kim, who has been teaching for eight years.

The schedule varies day by day. When the weather is nice, the two take class outside, where they can take advantage of the school’s island location. They have their own farm on the school grounds where they grow cucumbers and carrots that are used to make lunch. The eggs they fry come from two hens they are raising, and the farm’s melons and tomatoes make for healthy desserts. A nearby mud flat serves as a playground.

Every Wednesday, Kim and E-gun take a special trip to the mainland in Beolgyo-eup and join other students at the town’s school. The boat only makes two trips a day: one to the mainland in the morning and one back to the island in the afternoon. Each way takes one hour. If the weather gets bad, the two share a bed at Kim’s home in nearby Goheung County.
“Sometimes my wife visits the island with our 7-year-old and 4-year-old sons,” the teacher said. “My two sons play with E-gun as if he were their own brother.”

E-gun wasn’t always alone at school. He had a classmate until the fourth grade, after which the classmate’s family decided to move off the island.

The school first opened in May 1945, but in recent years, it has seen declining enrollment as younger people are moving to the mainland. Once E-gun moves up to middle school next year, he could be the last one to graduate from the school. The island’s only other child was born roughly a month ago.