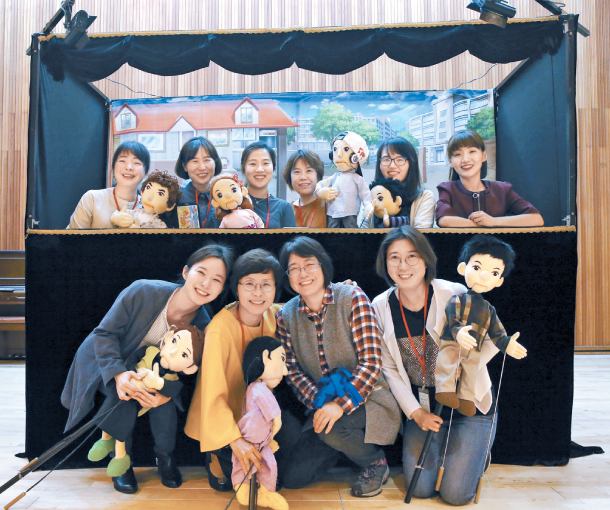 Nurses at Asan Medical Center in southern Seoul have been putting on a puppet show to educate students about sex and birth control since 2011. [ASAN MEDICAL CENTER]

On May 3, the students at Jamjeom Elementary School in Songpa District, southern Seoul, gathered in the school’s gymnasium for a puppet show. The lights dimmed, and a figure appeared on stage.

“A student tries to hold a friend’s arm,” the puppet said, “and when the friend says no, the student gets angry. Is this O.K.?”
Instinctively, the students responded by crossing their arms in an “X.” No, it was not okay.

The puppet show was part of a sexual education program organized by a team of nurses from nearby Asan Medical Center. The nurses have been putting on the show for the past seven years in schools around Songpa, Gangdong and Gwangjin.

Working with Good Neighbors, a nonprofit that focuses on community education, the nurses have performed the show 115 times to some 23,000 students. They discuss a wide range of topics from sexual consent and birth control to interpersonal relationships at school and safety on the streets.

The team now has about 40 members, all of them nurses at the medical center, and they take turns performing the 50-minute show during their off hours.

Kim Tae-hyun, a 50-year-old nurse who works in the nephrology division, is the only founding member left on the team. “We lose members often because they relocate or quit, but we also have new members who join because they are interested in volunteer work,” she said. “As nurses, volunteering comes naturally, which is why I think they are so diligent even when it’s just a puppet show.”

When Kim and her colleagues started the project in 2011, child abuse cases were making headlines. At first, many of the nurses were not entirely comfortable working on a sex ed puppet show, but over the course of its creation, they were able to reflect their own experiences in the show. “Many of my co-workers say they would not have been so embarrassed or asked for help had such education programs existed in the past,” Kim said.

The puppets might look light, but holding them for an hour is no easy task, especially since many of the nurses are going to the schools after their shifts. What drives them, Kim said, is the children’s laughter.
“During the show, we cannot see their faces, but we can hear them,” she said. “There is a scene where an adult tries to lure a child with a toy, and in this scene, we can hear kids shouting, ‘No, don’t go!’”

Kim’s team has revised the routine a number of times to make the show more approachable for kids. “In the beginning, we had some heavy scenes such as an older guy touching a girl,” Kim said. “Some kids would cry because they got scared so we decided to keep things lighter.”
The nurses believe the country needs more sex ed programs in order to educate children.

“We need more pragmatic sex ed,” she said. “Children should know how to avoid pregnancy. Adults also must help kids realize that sex is not something to hide so they can gain correct understanding. As kids grow older, the roles of the school, outside institutions and parents all become very important.”