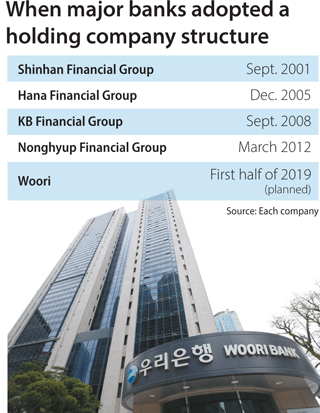 The bank said in a statement that it hopes to complete the process by early next year, adding that the move will “secure competitiveness as a comprehensive financial group.”

“Once turned into a holding company structure, we will be able to expand into high-profit businesses like securities, asset management and real estate trust funds,” the bank said. “This will improve capital efficiency and the company’s value.”

This is the first time that the bank has made the move official. Sohn Tae-seung, CEO of the bank, who assumed the post in December, has repeatedly discussed the need to adopt a holding company structure.

The announcement comes after the Financial Services Commission, the country’s top financial regulator, said it would sell off the government’s stake in the bank once the transformation is complete. Right now, the government holds 18.4 percent of Woori Bank through the state-owned Korea Deposit Insurance Corporation.

Woori Bank expects the change to increase the amount of investment it can make and diversify its portfolio. Currently, banking laws restrict Woori from investing more than 20 percent of its assets into subsidiaries, limiting the number of subsidiaries it can own.

Woori Bank currently has seven units under its wing, including Woori Card and Woori Investment Bank, the company’s corporate financing unit. Its local competitors operating under a holding company have much more diverse portfolios. For instance, KB Financial Group, the country’s largest financial holding company, has 12 subsidiaries, including a securities firm and insurance companies.

To complete the conversion, Woori Bank will now need a green light from the board of directors before submitting an application to financial authorities and gaining the approval of shareholders. The entire process is likely to take about half a year or longer, which is why the bank set early next year as a target for the conversion.

Woori is the only company among major banks in Korea, including KB Kookmin, Shinhan, KEB Hana and NH Nonghyup, that is not operating under a holding company structure, despite it being the first bank to adopt the structure nearly two decades ago.

The holding company, Woori Finance Holdings, was first established in April 2001 with the Korea Deposit Insurance Corporation owning a 100 percent share. The subsidiary included Hanvit Bank, the predecessor of Woori Bank. The holding company was dissolved in 2014 in the process of the government trying to privatize the company.

“It’s been difficult for the company to expand into non-banking businesses or globally as the only company not running under holding company structure among commercial banks,” the bank said in the press release. “This created some disadvantages for the company in the market.”