KANG MIN-SEOK
*The author is an editorial writer at the JoongAng Ilbo. 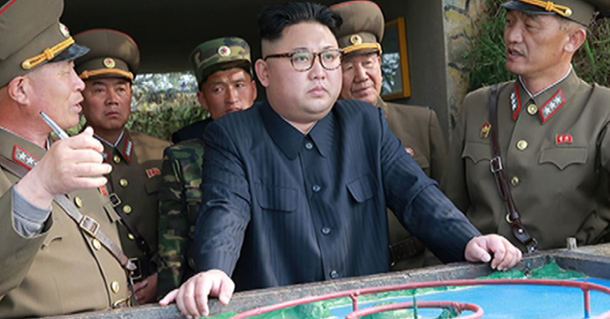 During the banquet after the inter-Korean summit on April 27, one man’s presence caught my attention. It was Jo Yong-won, director of the Organization and Guidance Department in North Korea’s Workers’ Party. The department is a powerful organ that has been called “a party within the party.” It oversees the vetting and purging of elite officials. It was surreal to see the agency’s mysterious mastermind in the South eating cold noodles with Blue House aides and ministers.

Interestingly, no one in military uniform was in sight. Ri Myong-su, chief of general staff of the Korean People’s Army; Pak Yong-sik, minister of the People’s Armed Forces; and Ri Yong-ho, the minister of foreign affairs, went to Panmunjom but returned to Pyongyang without joining the dinner. Why? It is hard to precisely pinpoint the intentions of North Korean leader Kim Jong-un, but he seemed to believe that involving military leaders would ruin the atmosphere.

Long ago, someone accurately pointed out the nature of the North Korean military. “They are stubborn second-class conservatives,” said Kim Jong-il, the father of Kim Jong-un. It was an answer he presented at the inter-Korean summit 11 years ago when President Roh Moo-hyun asked, “In South Korea, the military would not try something new with North Korea. How about the North?” Kim Jong-il replied, “When the issue with the United State is settled, there will be no place for the military. Perhaps that’s why the military brass in South and North Korea are making a fuss.” North Korea’s military elites will not like changes, so what’s their position on denuclearization?

A few days ago, Kim Kye-gwan, North Korea’s first vice minister of foreign affairs, suddenly threatened Kim Jong-un’s summit meeting with U.S. President Donald Trump, saying it might not happen. It was a statement by a diplomat, but The Washington Post analyzed that hawks in the military were anxious about the development of denuclearization talks and wanted to put the brakes on them. Their jitters were reflected in the vice minister’s statement.

It is unclear whether the North’s “stubborn, second-class conservatives” have begun to raise their voices, but now seems to be the time for hawks to emerge from the dark. There is no hard-line move without reason. Such a stance usually prevails to gain a negotiating edge externally and clear complaints internally. In other words, they “create” a crisis by threatening to suspend negotiations.

It is fortunate that North Korea is not leaving the table altogether, according to most analysts. In fact, Kim Kye-gwan specifically called John Bolton, a verified hawk in the United States, a “quasi-patriot.” He did not mention U.S. State Secretary Mike Pompeo, whom Kim Jong-un met in Pyongyang. It is a sign that the U.S.-North’s “in-depth conversation” in Pyongyang is still valid.