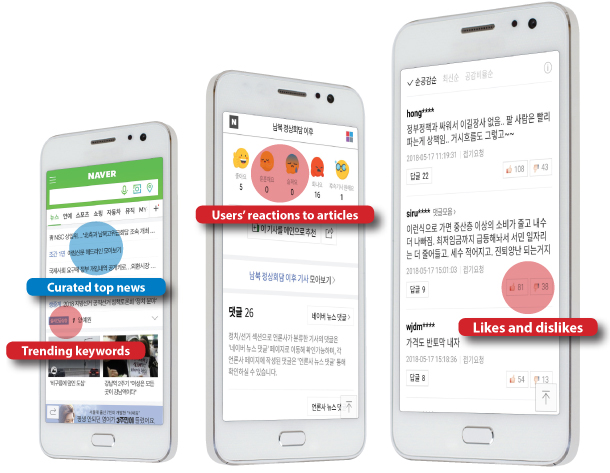 Korea’s leading internet portal, Naver, is changing its news section and the manner in which people can comment on stories after a scandal involving a power blogger known by Druking. He and his team were revealed last month to have tried manipulating public opinion about the Moon Jae-in administration by posting comments and “liking” stories on Naver.

Here are the basics to this ongoing social phenomenon: the portalization of Korea’s internet.

Q. Why is Naver’s news service getting so much attention?

Because it’s so powerful. Surveys show that more than 70 percent of Koreans use portal sites like Naver and Daum as their main news source. Naver has a 66 percent share of portal news readers and Daum 22 percent, according to a study last year from the Korea Press Foundation.

Q. What is a portal?

A portal site, or web portal, is an internet page that brings information from various sources - news, email, online communities - and shows parts of them all on a main page along with a search bar. As reflected in the word “portal,” they are gateways to online information and services. Before browsers like Internet Explorer became popular in the West, people used portals like AOL or CompuServe to access the World Wide Web and the internet. Even in the early part of this century, many people in the West relied on a Yahoo! homepage to navigate the Net. Yahoo! was the most popular web portal before its fall in the 2010s.

Nowadays, the search engine Google is the dominant IT giant in most countries, set as a homepage by many across the United States, Europe and other regions worldwide. Unlike portals that show various sections, search engines have a much simpler first page that only shows a search bar. Search engines send you to other parts of the internet: they don’t keep you in their ecosystem as portals do.

In Korea, most people set Naver or Daum as their homepage for when they access their internet browsers. Naver and Daum process nearly 90 percent of web searches by Korean users, far exceeding Google.

After the advent of smartphones, portal sites’ mobile apps arose as Koreans’ main method of navigating the internet beyond the PC.

Q. How do portals keep users in their ecosystems?

In the case of news, Google offers direct links to news organizations’ websites for each story, which is known as the outlink system.

In contrast, Korea’s portals host news stories inside their website - the inlink system - even though the news is produced by someone else, like a newspaper or broadcast network. Aside from the article itself, the news comes with a comments section below, which is run by the portal, not by the provider of the story.

It so happens that Koreans love commenting on news, sometimes with great passion and even malice, and this is a recurring source of controversy.

Based on an unknown algorithm, portal sites also curate articles that appear on their homepages - a decision that can widen or restrict the number of viewers by the thousands.

Q. Why did Naver make the recent changes?

The Druking scandal was the direct cause, but Naver has known the sensitivity of the issue for a long time.

Although portals are not supposed to have connections to political parties or companies, there have been allegations that news sections can be influenced by corporate and political forces. In October, Naver was found to have bowed to corporate pressure to intentionally bury a news story critical of the Korean football league.

Outside forces also try to manipulate the news portals run and the comments beneath the stories. The National Intelligence Service (NIS) employed teams to upload online comments before the 2012 presidential election. The aim was to sway voters in favor of Park Geun-hye, a candidate from then-President Lee Myung-bak’s party.

The NIS and Druking scandals were both organized acts of online manipulation with links to the ruling party. The NIS is accused of having used 6.9 billion won ($6.3 million) of government funds for the online campaign between 2009 and 2012. Druking was a registered member of the ruling Democratic Party (DP) and was later found in a police investigation to have exchanged phone messages with DP lawmaker Kim Kyoung-soo, who is a close confidant of President Moon Jae-in.

Facebook was embroiled in a similar controversy earlier this year, the Cambridge Analytica scandal. The U.K. company collected personal information of up to 87 million Facebook users, which was later used allegedly to influence the outcome of the 2016 U.S. presidential election and the 2016 Brexit referendum in the U.K.

But most media experts agree that portal sites are politically influential because of their agenda-setting power. The news that appears on portal homepages decides what the public talks about or perceives as important among all the incidents of that day.

Q. What are the main changes to Naver’s news section?

The most radical is Naver’s decision to adopt an outlink system like Google. Starting from the third quarter, news outlets can request Naver to stop hosting their news stories as inlinks and offer direct links to each outlet’s homepage.

This means giving up its rights to curate articles in the news section: News outlets will be choosing and curating their own news stories on Naver’s news platform.

Before, the portal signed contracts with select news organizations to feature articles on Naver’s website. The comments box and buttons representing readers’ reactions were also part of the news article page - all functions that kept users coming in. The portal will also remove the news section and a box showing 20 trending keywords from the homepage of the mobile app.

In regard to comments sections, there have been two rounds of changes in the past two months.

On April 25, Naver imposed limits on the number of comments that can be submitted by a single account on a particular article per day, to three from a previous 20. Users also were forced to wait at least one minute between posting comments, up from 10 seconds, to prevent use of automatic software such as macros.

On May 9, Naver restricted the use of multiple IDs by a single user - a method used by political opinion manipulators. The police have revealed that Druking and his team used over 2,000 IDs - most fake - to “like” certain comments that criticized the Moon Jae-in administration, thus elevating the comments’ positions below the article and raising their exposure to the public. It also announced that starting from the third quarter, media outlets will decide the way comments are aligned for their articles.

Q. Have online comments been subject to other types of criticism?

Malicious comments targeting specific groups or individuals have been a problem from the start of the internet in Korea. The comments often spread fake rumors - and can lead to tragedy.

In 2010, rapper Tablo of the group Epic High was accused by online trolls of having faked his academic background and his two degrees from Stanford University. The claims against Tablo continued even after the Korea JoongAng Daily printed his entire Stanford transcript. Whatbecomes, the online nickname of the man that led the campaign against Tablo, uploaded false rumors about the singer and other celebrities in Naver’s news comments section for years. He was ultimately revealed to be a 57-year-old Korean-American surnamed Kim, reportedly living in Chicago.

Online comments are often associated with cyberbullying as well. In 2016, a public official in his 50s was temporarily suspended from his job after writing news comments that ridiculed the victim of a gang rape in Sinan County, South Jeolla. He wrote comments that blamed the victim, a teacher of the three assailants’ children, saying the fault was hers for drinking with them.

Q. Has Naver tried to change its comment section before?

When the news comments box was first launched in 2004, the comments were in the order in which they came in. Two years later, Naver allowed users to “recommend” comments, which affected their order in the box: Comments with more recommendations rose in position. And then people with political and other intentions began using recommendations as a tool to manipulate opinions.

In 2007, it was made mandatory for portals to verify the identity of any users who wanted to leave comments. But the so-called real-name verification law was abolished in 2012 after the Constitutional Court ruled against it. Naver raised the number of per-day comments per person to 20 from 10.

In 2015, Naver added “like” and “dislike” buttons on each news comment, and that affected the order of the comments in the boxes, too.

Last year, Naver introduced a new function to hide malicious comments that users asked to be taken down.

It changed the method of arranging comments again, this time giving options to users: to base the order on the net number of likes, how recent the comments are or depending on the proportion of likes to dislikes.

Q. Are there other countries where portals are so powerful?

Yes. In Japan, Yahoo! still ranks as the most popular portal. Like Naver and Daum, it shows selected news on its homepage but the articles offered at the site are mostly straight articles or breaking news. Media outlets can choose whether or not to have a comment box below their articles.

The largest portal sites in China are Sina.com and Sohu but Chinese people’s favorite go-to for web searches is Baidu - a search engine similar to Google. Russians use Yandex.