From left: Chairman Koo Bon-moo holds up an LG flag at his inauguration ceremony in February 1995. Koo, far left, inspects one of LG Display’s LCD production plants in October 1996. Koo, right, with his surviving father and honorary chairman Koo Cha-kyung in August1999. [LG]

Koo Bon-moo’s tenure at the top of LG was marked by decisions to rename the company, then known as Lucky-GoldStar, into its current acronym and clean up its shareholding structure.

Born in Jinju, South Gyeongsang, in 1945, Koo entered Yonsei University to study business administration but went on to earn his bachelor’s and master’s degrees at universities in the United States. In 1975, a year after graduation, he joined Lucky Chemical, the predecessor of LG Chem, and climbed the corporate ladder.

In 1980, he moved to GoldStar, now LG Electronics, and served as an executive at the company’s Tokyo operation from 1983 to 1984. In 1989, he was promoted to vice chairman of LG. Twenty years after joining his family’s company, Koo became chairman in 1995 at the age of 50.

“I dream about LG becoming a No. 1 global business,” he said during his inaugural address to employees. “We will have to achieve the best by boldly challenging things that others don’t.” His declaration was seen by analysts as a shift from his father and grandfather’s vision of “harmony between humans” to “becoming a top player.”

Still, under Koo’s helm, LG continued to retain its philosophy of ethical management as represented by slogans like “creating value for customers” and “respect-based management.”

Soon after his inauguration, Koo made the bold decision of changing the 37-year-old company’s corporate identity. He combined Lucky, then the group’s chemical company, and GoldStar, the electronics maker, into LG. He established electronics, chemicals and telecommunications as the group’s key areas of focus.

Just four years into Koo’s term as chairman, LG jumped into telecom and displays with LG Telecom, now LG U+, and LG Philips LCD, present-day LG Display. Its existing chemicals business also expanded after Koo discovered the potential of rechargeable batteries when he visited the offices of AEA Technology in the U.K. in 1992. He brought back battery samples and ordered research into the then-emerging technology.

After much trial and error, LG Chem successfully developed Korea’s first lithium-ion battery in 1999 and is now a supplier for not only Hyundai Motor and Kia Motors but also international carmakers such as GM, Ford, Chrysler, Audi, Renault, Volvo and SAIC Motor. Koo continued to push for research in the field even after LG Chem posted nearly a 200 billion won ($185 million) loss from the rechargeable battery business in 2005.

The semiconductor business, however, remained a sore thumb. LG first entered the chip business through a joint venture with AT&T in 1979 and later consolidated it into GoldStar Electron in 1989 as it was struggling to compete with Samsung.

In 1999, the group was forced to sell off its semiconductor unit, GoldStar Electron, to rival Hyundai Group in a government-led restructuring of Korean businesses following the Asian financial crisis. The merged unit Hyundai Electronics, however, entered a debt workout program two years later and was acquired by SK Telecom to become today’s SK Hynix.

In the past 23 years with the late chairman at the helm, LG has posted resilient growth. The revenue across LG subsidiaries, which tallied around 30 trillion won in 1995, increased more than fivefold to 160 trillion won in 2017, even after GS, LS and LIG spun off into their own companies during that period.

Revenue from overseas also jumped 11 times over the same period to 110 trillion won, propped up by its leading position in chemicals and appliances.

Koo also took steps to make LG more transparent, doing away with its complicated cross-shareholding structure in 2003 and establishing a holding company. It was the first conglomerate in Korea to do so.

Unlike other family-run conglomerates that saw siblings wage high-profile battles over inheritance, Koo smoothly spun off LG’s business units - LS, GS and LIG - and divvied them up between his brothers and longtime business partners in the early 2000s. Its pursuit of corporate reform contributed to LG becoming a rarity among Korea’s top five conglomerates. It is the only one that has not had any of its leaders or owner family members arrested or indicted for any illegal activities or embroiled in high-profile scandals.

LG’s future-oriented drive continues. In April, it acquired ZKW, an Austrian supplier of automobile lights, for 1.44 trillion won, the company’s largest acquisition ever, to beef up its vehicle components business.

The group also opened Science Park, a massive research and development campus in Magok-dong, western Seoul, on April 20. The campus, which spans 42 acres and cost 4 trillion won to build, will be devoted to labs run by different subsidiaries under the LG umbrella.

Koo Kwang-mo, a senior executive at LG Electronics and adopted son of Koo Bon-moo, is widely speculated to become the next leader of the family-run business under the tradition that the first son takes over. Last week, the board of directors at LG Corporation, the holding company of LG, named him to be an internal director.

For the time being, the 40-year-old Koo is expected to run the business along with six other executives including his uncle and Vice Chairman Koo Bon-joon, 67, who might eventually leave the group with his own spun-off unit, based on precedence.

Koo Kwang-mo has been raising his stake in LG Corporation over time. In 2006, when he landed a job at LG as a potential heir, his stake stood at a mere 2.75 percent. But the portion rose to 6.24 percent in 2014 after inheriting 1.9 million shares from his birth father, Koo Bon-neung, the younger brother of Koo Bon-moo.

If Koo Kwang-mo takes over the entire 11.28 percent stake that his adoptive father had, he will have to pay up to 1 trillion won in inheritance taxes.

A potential stumbling block for his inheritance is the fact that prosecutors earlier this month launched a probe into alleged tax evasion of around 10 billion won by some 10 members of the Koo family.

A raid took place at the headquarters of LG on May 9 after the National Tax Service filed a complaint a month earlier on suspicions that family members dodged capital gains taxes. Koo Kwang-mo also faces allegations that he unfairly took profit out of his stake in LG Corporation. 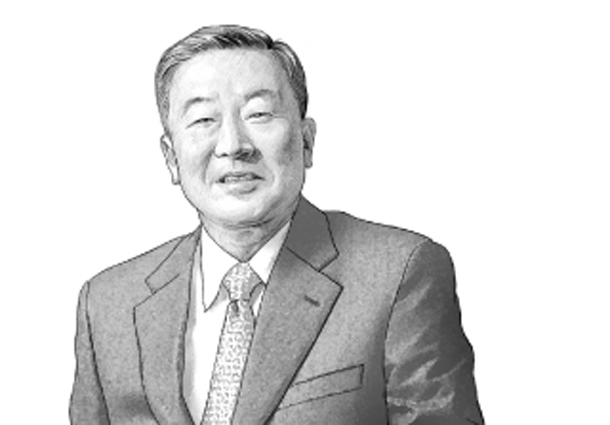 1975 Joins Lucky Chemical Industrial, the predecessor of LG Chem, as an assistant manager in the inspection department

1981 Named managing director at GoldStar, the predecessor of LG Electronics

1996 LG Telecom, the predecessor of LG U+, is launched

2003 LG becomes the first Korean conglomerate to convert to a holding company structure, spins off LS