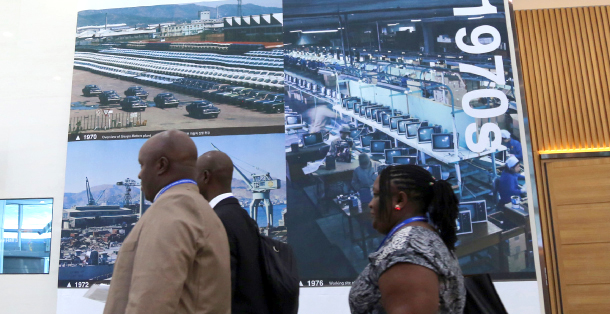 Delegates attend the 53rd annual African Development Bank meeting held at Bexco in Busan on Monday. The meeting will run through Friday and includes panels on various development issues such as the fourth industrial revolution and innovative growth. [YONHAP]

The 53rd annual meeting of the African Development Bank will run until Friday in the southeastern port city under the theme “Accelerating Africa’s Industrialization.” The Busan meeting is the fifth to be held outside Africa.

Moroccan Prime Minister Saad Eddine Othmani plans to join a high-level session as a panelist, and Jim Yong Kim, president of the World Bank, will deliver a special address.

Kim Dong-yeon, Korea’s finance minister, will meet with African finance ministers and chiefs of international organizations for discussions on Africa and the fourth industrial revolution on Tuesday.

African trade and industry ministers will also participate in the Korea-Africa Economic Cooperation meeting on the sidelines of the bank’s conference. The biennial meeting was first held in 2006.

A large group of African business leaders will also visit the country to contribute to discussions at this year’s gathering.

On Tuesday, eight African government ministries and state-run companies will introduce major infrastructure development projects in their countries to seek investment from Korean financiers and businesses. One-on-one meetings between 45 African agencies and Korean companies are also scheduled throughout this week.

A variety of cultural events will take place in Busan to mark the bank’s annual conference. With “blending nature, people and culture” as the theme, the events, including a cultural festival, exhibition of African relics, art display and film festival, will provide a broad spectrum of African culture.

The African Cultural Festival will be held at the Busan Cinema Center on Tuesday to give local residents an opportunity to experience the nature, life and culture of Africa. An art market with handmade products and crafts by Busan artists, as well as dance and song performances by African artists, will also take place.

The African Development Bank was established in 1964 to contribute to the economic and social development of Africa by promoting investment among 54 member countries inside the continent and 26 from outside the region. Korea joined the organization in 1984.