A logjam in innovative growth

A logjam in innovative growth

KIM WON-BAE
*The author is a business news writer of the JoongAng Ilbo. 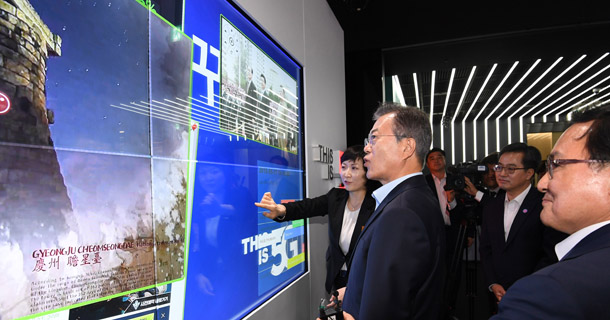 “A creative economy is necessary, but it should not contain specific details. Creativity should be pursued in a free environment with a wide and long-term view, but it is taking a wrong direction because certain things are defined,” wrote Yoon Won-bae, a professor at Sookmyung Women’s University.

Eight progressive economists criticized the creative economy of the Park Geun-hye administration in the 2016 book, “Abnormal Economic Summit.” If you replace “creative economy” with the Moon Jae-in administration’s “innovative economy,” there are a few points to ruminate on.
On May 17, at Korea’s Innovative Growth Convention, President Moon Jae-in said, “It feels like Korea is walking when competitors are running. Speed is the key.” President Moon ordered the government to pursue innovative growth with speed and vigor. He also asked companies to trust the government’s solid will and actively engage in technology development and investment.

Last year, an 11 trillion won ($10.1 billion) supplementary budget was planned, and the minimum wage was raised this year for income-led growth. But the latest employment situation is not going well. Jobs have only increased by 100,000 for three consecutive months. The slowdown may be the reason to ask for speedy innovative growth.

In the first quarter, 26,747 new corporations were set up, a quarterly record. But the rate of increase from the same period last year slowed down to 5.1 percent. We need to watch whether the new corporations can survive. The large conglomerates’ role is still important to make major investments and create quality jobs.

However, the corporate atmosphere is not good. After the Hanjin heiress threw a water glass at an ad agency employee, longstanding evils in the business sector have become targeted. On May 14, President Moon ordered an investigative team be created to trace offshore tax evasion. The National Tax Service has started investigating 50 large corporations and wealthy individuals suspected of illegal inheritance and gifting. Wrongs must be corrected, but companies are inevitably daunted when the investigation scope is too wide.

At the convention, Deputy Prime Minister and Minister of Strategy and Finance Kim Dong-yeon said, “Companies are withering. We need to vitalize the businesses and the markets. The flower of innovation should bloom in the companies and markets.”

Kim said, “When employment stability is secured, we need to prepare for the flexibility issue.” However, it is hard to expect that companies will be vitalized and labor market reform will be attained as Kim said. As long as these ideas remain Kim’s words, it won’t be easy for innovative growth to accelerate.