Folk singer opens up his slice of heaven : Lee Jang-hee’s garden is now an art center for visitors to enjoy

Folk singer opens up his slice of heaven : Lee Jang-hee’s garden is now an art center for visitors to enjoy 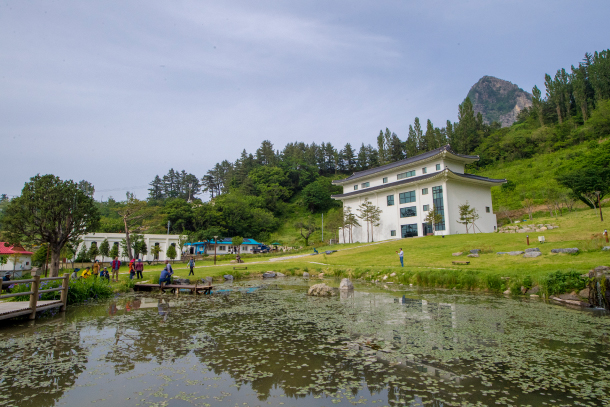 Ulleung Heaven, an art center on Ulleung Island, North Gyeongsang, opened on May 8 with a concert from folk singer Lee Jang-hee. The art center was built by the North Gyeongsang provincial government on a vast garden donated by Lee. The small house with a blue roof is Lee’s house, where he has lived since 2004. [PRM]

These are some of the lyrics to 71-year-old singer and songwriter Lee Jang-hee’s latest song that he wrote to express his affection towards his “final home” on Ulleungdo, or Ulleung Island, where he settled down in 2004.

On May 8, 14 years after its release, the singer performed the song for the first time on the island in front of his fans and neighbors at the new art center, named Ulleung Heaven, to signal the opening of the island’s very first high-end cultural art center built in the 1,652-square-meter (0.4-acre) garden in front of his house.

Four years ago, the then-governor of North Gyeongsang visited Lee, asking if he was willing to sell the grand basin garden that houses a pond and a majestic peak so that the provincial office could establish an art center for visitors and residents to enjoy cultural events that could be organized there. While Lee chose to move to Ulleung Island and live there in order to isolate himself in the nature and enjoy peace and quiet, he decided to donate the land so that “music could resonate from an island [he] loves so dearly.” 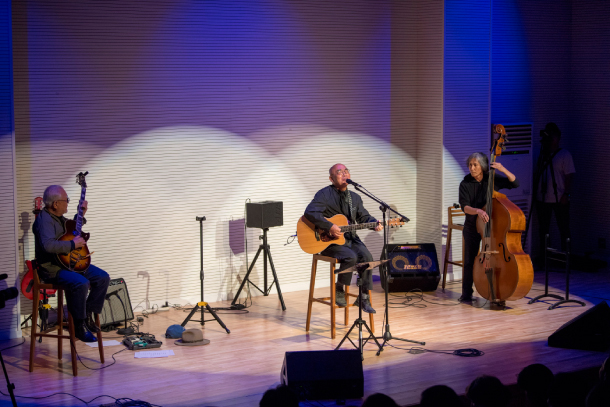 Lee, center, performs together with his two best friends Jo Won-ik right, and Kang Geun-sik, left, on May 15 at Ulleung Heaven to celebrate the opening of the center. [PRM]

Lee held his third concert at the art center on May 15. The folk singer and his two friends, Jo Won-ik on double bass and Kang Geun-sik on electric guitar, performed about a dozen songs together, most of which were Lee’s hits from the 1970s and 80s. The three musicians used to belong to the folk band C’est Si Bon, which was quite popular in Korea during the ’70s and ’80s.

As a testament to Lee’s popularity in the past, Lee’s concert last week was sold out, as were his two previous ones, filled with tourists and residents who came to see the singer perform live for the first time in many years.

“I’ve been neglecting my passion for music for the past 40 years,” said Lee during the concert. “But I’m so happy to be doing it again on this island I call heaven with two of my best friends.”

The second floor of the art center is an exhibition hall where visitors can learn about the history of Korean folk music.

Lee’s trio will perform three times a week, on Tuesdays, Thursdays and Saturdays, until September to celebrate the opening of the art center and then officially open up the venue for other events.