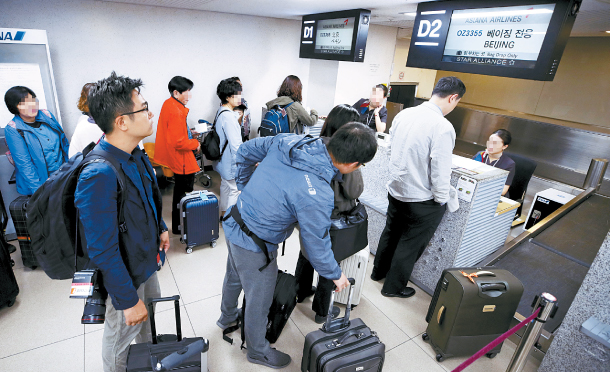 South Korean journalists covering the shutdown of the nuclear test site check in for their flight to Beijing at Gimpo International Airport on Monday morning. [JOINT PRESS CORPS]

South Korean journalists flew to Beijing Monday morning on their way to cover the dismantling of a nuclear test site in North Korea - without Pyongyang’s approval to come.

After canceling ministerial talks with the South last week, North Korea on Monday continued to snub reporters from South Korea selected to attend the demolition of the North’s nuclear testing site in Punggye-ri, where all of its underground nuclear tests have been conducted since 2006. Seoul’s Unification Ministry, which handles inter-Korean relations, said early Monday the North was not even responding to an effort by the South to send a list of eight South Korean reporters - four from News1 news agency and four from broadcaster MBC - via a communication channel set up at the border village of Panmunjom. The first batch of South Korean reporters left for a Beijing stopover on Monday morning not knowing if they would be allowed in the North.

The North’s stonewalling is a shift of stance from May 12 when it informed Seoul that South Korean journalists would be allowed to visit the North from March 23 to 25 to cover its dismantling of its nuclear testing facility in the northeastern part of the country, along with journalists from the United States, Russia, China and the U.K.

Pyongyang was silent on the South Korean journalists as of press time on Monday, although reporters from the other nations are set to receive their visas from the North Korean embassy on Tuesday morning.

In a sign of its disgruntlement with Seoul, Pyongyang also demanded Saturday the return of 12 North Korean defectors who made it to the South in April 2016, claiming they were lured and kidnapped by the South’s spy agency, the National Intelligence Service, to help the former conservative Park Geun-hye government score political points ahead of general elections at the time.

In an English dispatch carried by the state-run Korean Central News Agency (KCNA) Saturday, an unnamed spokesman of the North’s Red Cross said the defection of 12 former employees from a state-run restaurant in the Chinese city of Ningbo was “proven to be a conspiratorial farce cooked up” by the Park Geun-hye administration.

The North warned that it would take the South’s response to its demand as a signal of its sincerity in improving inter-Korean relations and that it could walk away from the Panmunjom Declaration signed at the inter-Korean summit last month and its promise to hold a reunion of families separated during the Korean War of 1950-1953 on the occasion of the Aug. 15 Liberation Day if Seoul didn’t return the 12 female defectors. (A male manager also defected with the women.)

Unification Minister Cho Myoung-gyon said Monday the North’s invitation to the South Korean journalists was brought up at the inter-Korean summit on April 27 and that he hopes Pyongyang takes “positive steps” to admit the South’s reporters.

According to a number of journalists from ABC, CNN and The Associated Press, North Korea informed those assigned to cover the nuclear test site demolition to gather at the North Korean Embassy in Beijing on Tuesday morning.

The North reportedly charged the journalists a fee of $10,000 per visa on top of flight fees. With travel costs and other expenses such as lodging, the entire trip is estimated to cost around $30,000 per reporter or camera operator.

Pyongyang earlier promised that a charter flight from Beijing to Wonsan, a port city on North Korea’s east coast, would be provided for the journalists through Air Koryo, North Korea’s flag carrier airline. They will then board a special train headed north to the nuclear site in North Hamgyong Province.

According to ABC News, the journalists will be put up at a luxury hotel in Wonsan after arriving at its newly constructed airport. North Korea has also requested that the journalists cover the Special Tourist Zone at Wonsan, located near the scenic Mount Kumgang and Masik Pass, where North Korean leader Kim Jong-un ordered the construction of a fancy ski resort following his assumption of power.

Visa fees usually ranged from around $40 for South Koreans to $160 for American citizens when the North was accepting tourists in the past to places like Kumgang Mountains or its capital of Pyongyang.

“It appears special accommodation preparations are being made given the inaccessibility of the event’s location and the lack of flight routes there,” a South Korean government source told Yonhap News Agency. “Even so, the price seems excessive.”

This is not the first time that Pyongyang has imposed a hefty fee on foreign news outlets in exchange for coverage. It was rumored that the U.S. government paid the North around $2.5 million in 2008 to receive permission for its journalists to report on the demolition of a cooling tower at the Yongbyon nuclear complex.

The Unification Ministry said the North has not demanded money from Seoul in regards to the dismantling ceremony but that it is “unclear how the situation will unfold” concerning whether the South Korean journalists will be able to attend the event.

Signs have emerged that the ceremony will proceed regardless, given that additional dismantlement steps have been taken at the Punggye-ri nuclear testing site. 38 North, a North Korea analysis website, said Thursday such steps included “preparations to build a safe reviewing stand for visitors to observe the explosive closure of all three Punggye-ri portal areas,” citing its analysis of satellite imagery from May 15.

Pyongyang earlier had also threatened to scrap the highly anticipated Trump-Kim summit slated for June 12, balking at what it saw as Washington’s instance on the so-called Libya denuclearization model, which would require the North to rid itself of its nuclear arsenal in a complete, verifiable and irreversible manner before sanctions relief. Experts say the North’s recent posturing is part of its strategy to gain an upper hand in the upcoming summit with Trump.

“[The North’s recent gestures] appear to indicate Pyongyang’s calculation that it could have [President Moon Jae-in] to draw concessions from Trump through the South-U.S. summit meeting in Washington [on Tuesday],” said Kim Hyun-wook, a professor at the National Korea Diplomatic Academy.