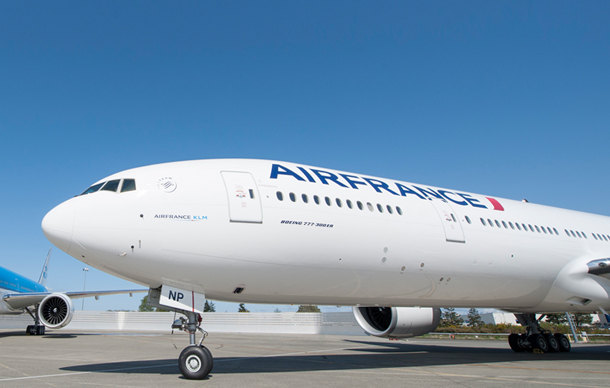 PARIS - It just got a little easier to visit the City of Lights.

This year, Air France is celebrating the 35th anniversary of its first flight from Europe to Seoul in 1983.

From the beginning of this month until Oct. 27, an additional flight will leave for Paris from Incheon International Airport on Monday, Wednesday and Saturday. Additional flights returning from Paris are available on Tuesday, Friday and Sunday.

Currently, two flights traveling either from Incheon to Paris and from Paris to Incheon depart every day. The 1:20 p.m. flight is shared with Korean Air.

The additional three flights a week increases Air France’s flights between the cities from 14 a week to 17, and will increase weekly available seats by 28 percent.

“In 2015 and 2016, the number of Asian passengers flying to Europe stabilized and even decreased a bit because the situation in Europe wasn’t so good in terms of politics and security,” said Antoine Pussiau, senior vice president of Air France’s Asia Pacific division. “But now we are seeing Asian passengers coming back to Europe, not only to France but other major countries like Italy, the Netherlands and Great Britain.” 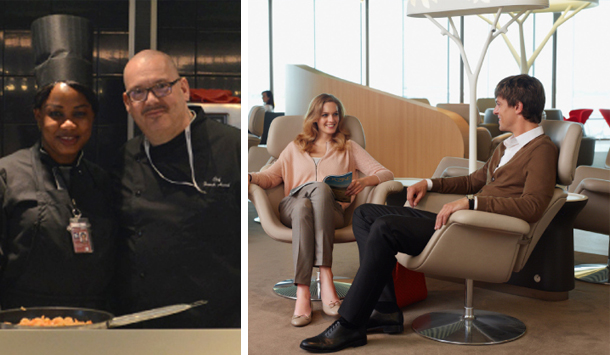 According to the European Travel Commission’s tourism report released in February, travelers to Europe in 2017 rose a record 8 percent last year to 671 million, much better than the 2 percent increase seen in 2016.

The report noted that stronger growth last year was due to improved economic growth in source countries as well as easing security concerns in Belgium, France and Turkey.

The Paris Region Tourist Board estimated that last year, the number of international visitors to hotels in Paris surged 13.7 percent year-on-year. Chinese and Japanese clients increased by double digits, though it didn’t have a figure for Koreans.

According to one study, Koreans’ favorite travel destination is Paris.

According to a study released in April by the Korean office of U.K.-based travel website Skyscanner, Koreans searched for European destinations 141 percent more last year than in 2016. 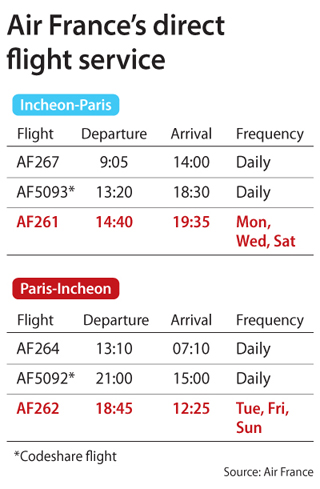 While the Korean government tracks the number of Korean leaving the country, it does not note their travel destination.

Although Paris is still on top, it has been facing stiff competition from other European cities such as Warsaw, Lisbon and Barcelona.

Warsaw, Poland, saw the sharpest increase in searches from Koreans. Interest surged by 257 percent, while searches for Budapest increased by 236 percent and Lisbon and Barcelona jumped by 193 percent and 174 percent.

Air France said it has one distinctive advantage against the competition, though — Charles de Gaulle Airport, which serves as the airline’s principle hub.

The airport received over 63 million passengers last year. Roughly 24 percent transferred to other flights, with some traveling as far as South America.

“When you arrive in Charles de Gaulle Airport, you can connect to everywhere,” said Pussiau. “We fly to 134 countries from North and South America to Africa. Some of the competition only flies to one point or another, like only arriving in Barcelona and nowhere else.”

Air France and the airport have been working together for over two decades to attract more passengers to transfer flights. In order for the airport to be considered a “hub,” more than 20 percent of all passengers arriving at the airport must be transferring to other flights.

As a result, Air France and the airport have been focusing on increasing convenience for customers.

This includes a separate passageway for people transferring to another Schengen area, which refers to the 26 countries in Europe that do not required border checks.

But what Air France boasts about most is the service at its premium first- and business-class lounges.

The airline has a single first-class lounge near the entrance to Charles de Gaulle and seven business lounges spread across the airport.

The first-class lounge provides one-stop services, from ticketing to luggage loading. It will even send a driver to deliver passengers to the front door of their flight in a luxury vehicle.

Air France has revamped its business lounge, also referred to as the Salon Lounge, in recent years.

Among the seven lounges, the one at Hall L is the largest as it covers an area of 3,200 square meters (34,444 square feet). Air France opened up a newly-furbished 2,180 square meter area in January, and it plans to reopen the remaining area in July this year.

One of the lounge’s distinctive features is its open kitchen, which allows the customers to see their dish being cooked by chefs.

The lounge has an “instant relaxation” area with more comfortable sofas that allow the customers waiting for a long period to take naps or work in quiet. It also offers a 15-miniute free facial treatment in partnership with cosmetics company Clarins.

The lounge in Hall M, which opened in June 2012, was designed by famous French designer Noe Duchaufour-Lawrance. The lounge’s wooden interior provides a soothing atmosphere.

Garnier-Plat, the lounge’s product manager, said that the experience that customers get before boarding the plane is just as important as the flight itself.

“[We] are very focused on customer experience and attention to detail,” said Garnier-Plat.

She said one of the key experiences of the lounge is offering customers a firsthand take on the French way of life through food and drink.

“Everything that’s to relax, that’s the way of [French] life,” the lounge product manager said.

Even for non-business passengers, Air France is providing special events. On May 5, which is celebrated as Children’s Day in Korea, Air France provided gifts to children flying back to Incheon. One Japanese girl didn’t understand why she received a gift. She muttered to herself, “why?” in Japanese as she opened the package with delight.