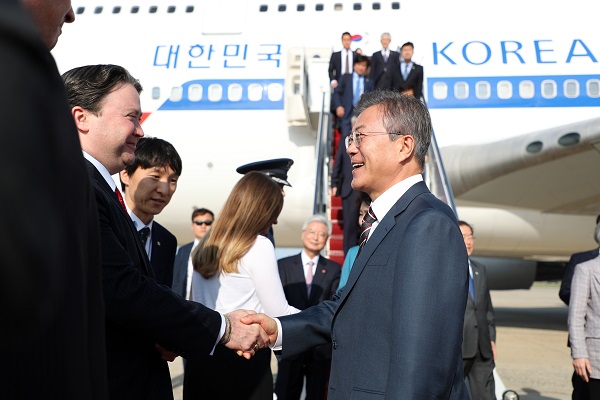 South Korean President Moon Jae-in, right, is greeted by Marc Knapper, left, acting U.S. ambassador to Seoul, as Moon arrived at Joint Base Andrews in Maryland on Monday. Moon is slated to have a summit meeting with U.S. President Donald Trump on Tuesday Washington time. [YONHAP]

WASHINGTON — A senior Blue House official said it was “99.9 percent likely” that a historic North Korea-U.S. summit will take place next month amidst growing worries about the North threatening to pull out of the meeting.

“We think it is 99.9 percent likely that the summit will take place,” Chung Eui-yong, head of the Blue House’s National Security Office, told reporters on the presidential plane en route to Washington for President Moon Jae-in’s summit meeting with President Donald Trump at the White House scheduled for Tuesday.

Moon made his third visit to the United States since taking office last May “to prepare” as there “could be many variables” in the preparation in the run-up to the June 12 summit in Singapore, according to Chung.

Moon’s summit with Trump, which was set to begin with a one-on-one meeting only accompanied by interpreters Tuesday in the Oval Office, comes three weeks ahead of the Kim Jong-un-Trump summit amid growing jitters and skepticism about the North ridding itself of weapons of mass destruction.

Taking note of such concerns, Moon’s security adviser said the two allies had “kept close coordination” to draft a strategy for the June 12 Singapore meeting and shared all relevant information.

Chung said he hoped the two leaders would exchange opinions at the Tuesday summit to find ways to further induce the North to denuclearize as envisioned by Seoul and Washington.

Chung’s comment, apparently intended to calm jittery speculation about prospects for the June 12 summit, came after U.S. media reports over the weekend pointed at growing skepticism over the North’s willingness to denuclearize.

In one New York Times story published Sunday, Trump reportedly peppered his aides with questions about the wisdom of hosting the summit with North Korean leader Kim out of concern that the meeting could turn into a “political embarrassment” for him should the North come to the table refusing denuclearization.

Trump also reportedly asked President Moon during a 20-minute phone conversation on Sunday about the sudden shift to a hard-line stance by the North last week, when it threatened to pull out of the Kim-Trump summit in protest of Washington insisting on complete, verifiable, irreversible dismantlement (CVID) of its nuclear weapons.

Chung refuted the New York Times report, saying Trump did not make such an inquiry during the chat.

One unnamed U.S. official was quoted in a report by The Washington Post published Sunday as saying,

“It doesn’t look like they want to denuclearize at all,” casting a cloud of uncertainty over the summit. The official noted that neither Pyongyang nor Washington were “backing out yet,” though the official cited the need for “more coordination” between the two.

Asked about the North’s recent denunciation of the South and United States and threat of walking away from the June 12 summit, Chung said Seoul was trying to understand the North’s intention.

With questions about the Kim-Trump summit on the rise, U.S. Secretary of State Mike Pompeo, who made two visits to Pyongyang in recent weeks to meet North Korean leader Kim, indicated Monday the United States’ intention to hold the summit with Kim remained.

“Our willingness to meet with Kim Jong-un underscores the Trump administration’s commitment to diplomacy and helps solve the greatest challenges even with our staunchest adversaries," the top U.S. diplomat said in a speech at the Heritage Foundation.

"That willingness has been accompanied by a painful pressure campaign and reflects our commitment to resolve this challenge forever."
U.S. Treasury Secretary Steve Mnuchin also denied that Trump was reconsidering his meeting with Kim, saying, “I don’t think the president gets cold feet about anything,” to reporters at the White House Monday.

“The president is set. Right now it’s still on. If that changes, you’ll find out about it."

Trump tweeted Monday he wanted “North Korea to be VERY successful, but only after signing!” referring to the signing of a denuclearization deal at the June 12 summit, signaling that hosting the summit is not off the table.

With both South Korean and U.S. officials trying to placate concerns over the North-U.S. summit, the Moon-Trump summit will begin with a one-on-one meeting followed by a luncheon with officials from both countries at the White House.