[News in focus] Hyundai restructuring relies on Chung’s plan B

[News in focus] Hyundai restructuring relies on Chung’s plan B 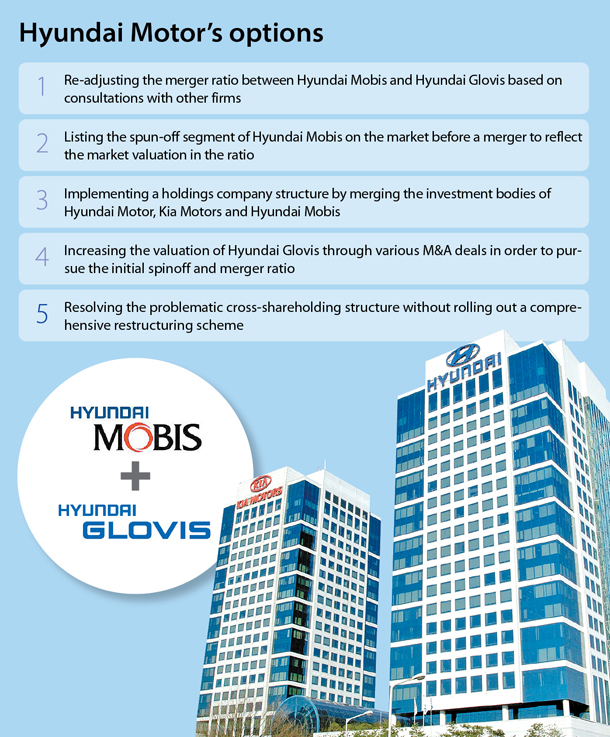 Hyundai Motor abruptly canceled its attempts to overhaul its governance structure on Monday after receiving negative feedback from the market.

Industry experts praised the difficult decision, saying it was “wise” for the group to preemptively withdraw the plan before receiving an official no from shareholders, because revising the original proposal would have been more difficult.

“We will re-evaluate our restructuring plan to better enhance the group’s business competitiveness and corporate governance as well as to strengthen shareholder value,” said Vice Chairman Chung Eui-sun in a statement Monday.

All eyes are now on Chung’s plan B.

The merger ratio was set at 0.61:1, which means each Hyundai Mobis shareholders would receive 0.61 Hyundai Glovis shares for every Mobis share they have after the spinoff and merger. According to the automotive company, the ratio was set after consulting with law firm Kim & Chang and accounting firm Samil PwC, two top players in their industries.

“In Chung Eui-sun’s statement, he said Hyundai will ‘supplement’ the original plan, which means it is highly unlikely for them to start from square one,” said Koh Tae-bong, a senior analyst at Hi Investment & Securities.

“The main idea of having Hyundai Mobis and Hyundai Glovis in the center and rolling out a spinoff and merger between them will be maintained,” he added.

Even if Hyundai Motor wanted to devise a completely new scheme, it is now too late to do so.

“A new plan would inevitably go against some of the logic Hyundai Motor claimed about its original strategy and plan,” said Kim Jin-woo, an analyst from Korea Investment & Securities. “It would not be easy for the group to make claims that contradict their past claims.”

Reflecting the market valuation in the merger ratio will prevent such conflicts.

“How the ratio will be set in this scenario will have to be seen, but considering the current market trend is strong for Hyundai Mobis and weak for Hyundai Glovis, things will be unfavorable for Chung Eui-sun [who holds more Glovis shares than Mobis shares],” Koh added.

The price of success

A transparent reflection of the market valuation in the merger ratio would not benefit the owner Chung family.

According to the original plan, Chung Eui-sun and his father Chairman Chung Mong-koo would sell their stakes in Hyundai Glovis, totaling 30 percent, to Kia Motors and other affiliates. This would allow them to secure enough capital to buy Hyundai Mobis shares and turn it into the de facto holding company of the group. The plan was to expand their share of Hyundai Mobis from the current 7 percent to 30.3 percent after buying Mobis shares from Kia Motors, Hyundai Glovis and Hyundai Steel.

If Hyundai Mobis’ valuation goes up and Glovis’ valuation down, it would mean that the owner family will not be able to secure that many Mobis shares with limited capital.

“It would be a matter of how much Chung Eui-sun is willing to give up his ownership in order to enhance shareholder value,” Koh said.

There are other options, such as implementing the holdings company structure suggested by Elliott. This would likely be achieved by spinning off Hyundai Motor, Kia Motors and Hyundai Mobis’ investment bodies and merging them to create the holding company.

This option is incredibly unlikely, as Korean law forbids a holding company from owning any financial affiliates. Hyundai Motor would be forced to get rid of affiliates like Hyundai Capital - a move that will not be popular with investors.

Fair Trade Commission head Kim Sang-jo officially has already made it clear that the government will not make an exception for the automotive company. It would also take more than a year to evaluate each company

“Most of the options being discussed in the market at the moment take at least a year, which means the restructuring scheme at Hyundai Motor is not likely to be completed this year,” said Korea Investment & Securities analyst Kim.