Behind the fight for Jeju Island : Documentary follows residents desperate to save their home

Behind the fight for Jeju Island : Documentary follows residents desperate to save their home 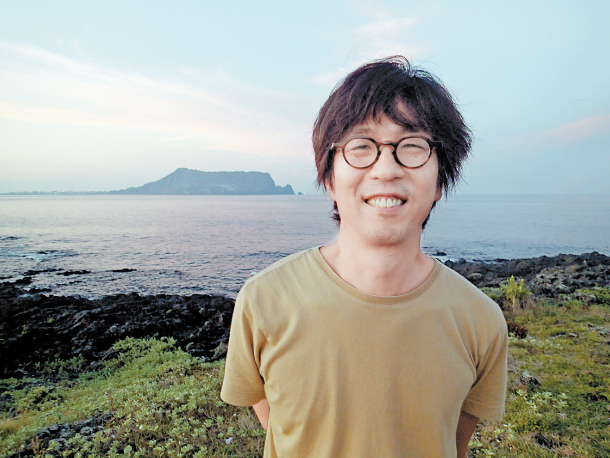 In his documentary “Jeju Note,” Min Hwan-ki tells the story of Jeju’s development through the eyes of three concerned residents. [MIN HWAN-KI]

For many Koreans, Jeju Island evokes the image of an untouched paradise with breathtaking coastlines, dramatic peaks and picturesque waterfalls. The island’s slow-paced life has been romanticized in television programs like “Hyori’s Homestay,” where guests visit the famous K-pop singer to escape the hustle and bustle of urban life.

But underneath the veneer of calm and tranquility is an island grappling with the unwelcome problems that come with its popularity: overdevelopment and environmental destruction.

“Jeju Note,” the latest documentary from director Min Hwan-ki, explores those very issues. A film professor at Chung-Ang University in Seoul, Min vividly tells the story of Jeju Island’s development from the perspective of its residents, who have grown increasingly worried about the construction of a second airport on the island and establishment of a naval base near Gangjeong Village on the island’s southern coast. Screened under the Korea Cinemascape section at this year’s Jeonju International Film Festival, “Jeju Note” follows three residents with strong beliefs about how to protect their island.

In 2007, then-President Roh Moo-hyun announced plans to build a major naval base on Jeju Island, arguing that it would help the Korean Navy improve its coastal defense capabilities. Since then, the residents of Gangjeong Village in Seogwipo have been at odds with the authorities over the base. Villagers and left-leaning civic groups have attempted to block progress of the construction without much success. 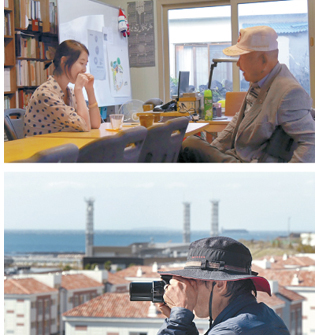 Top: Da-un, left, moved from Daegu to Jeju Island in search of a slower life. Bottom: A Jeju resident persistently monitors the construction of a naval base on the island. [JEONJU INTERNAL FILM FESTIVAL]

“The government designated Gangjeong Village as an absolute preservation village, but they simply broke the area apart,” Min told the Korea JoongAng Daily. “If they want to build a naval base, which imposes great harm and damage to the villagers, they should have at least prepared for a long process to convince the residents instead of simply labeling the opponents as ‘commies.’”

The base was completed in February 2016, but residents have continued to fight the authorities, arguing that the construction has caused environmental destruction and threatens the island’s peace. Many in Jeju Island still grapple with the trauma of the Jeju Massacre on April 3, 1948, when the government wiped out 30,000 people, nearly 10 percent of the island’s population, in an anticommunist crackdown.

“Jeju Note” was shot while construction of the naval base was ongoing. One of the characters is a penniless middle-aged man who goes by the name “Werewolf” in the movie. Sleeping inside a tent and eating mostly crushed ramen, the man always has binoculars at hand to spot any potentially illegal activity on the naval base’s construction site.

Werewolf meticulously notes every action that takes place at the site to collect evidence against the Navy. He once spotted and recorded construction workers disposing cement pieces into the sea. After noticing they were being watched, workers halted the practice for a bit.

“I want to prove that what the Navy says are lies,” Werewolf says in the film.

Another character is 20-something Da-un, who recently settled on the island from Daegu in search of a tranquil life. A happy and easygoing woman, Da-un enjoys what Jeju Island has to offer to its fullest, indulging in the smells of a canola flower garden in the spring and treading through snow during the winter. But when she notices the naval base’s construction destroying the island’s landscape, she takes to the streets and joins the Gangjeong Life Peace March, a demonstration in the local village.

Throughout the film, the director highlights the beauty of Jeju Island’s scenery by contrasting the protesters’ indignation with the island’s natural elements.

“I think time flows differently in Jeju,” Min said. “There are things that are beautiful even if they remain unchanged, and Jeju’s scenery is one of them. People in cities never stop to achieve more, only to feel disappointed when they don’t yield satisfying results. But in Jeju, just staring at the landscape without doing much else makes you feel happy. It gives you a different idea of spending time.”

The documentary’s third character, Jong-hwan, embodies that idea. A high-strung resident who cooks meals for activists, he puts on a more comfortable face when he’s riding his bike along the coastline or quietly looking at rocks. Eventually, he is one of many residents who is arrested for obstructing the naval base’s construction.

“What they truly want is an apology,” Min said. “They argue that if the government is not willing to remove the naval base, the authorities should at least apologize to the village residents for the irreparable damage imposed on the town.”