At trial, Lee lashes out at charges

At trial, Lee lashes out at charges 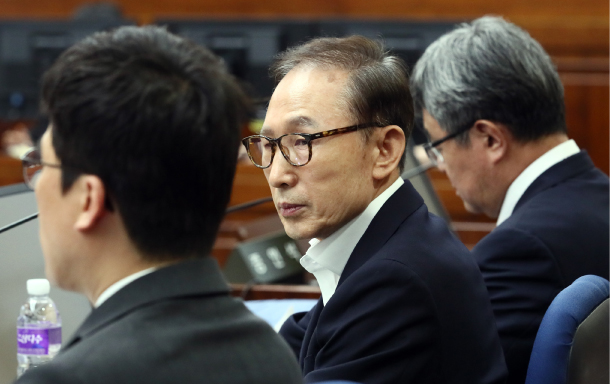 Former President Lee Myung-bak, center, sits in the defendant’s chair during his first hearing at the Seoul Central District Court on Wednesday. Lee, who served in office from 2008 to 2013, faces 16 charges including bribery, tax evasion and abuse of power. Authorities detained him on March 22 and indicted him on April 9. [YONHAP]

Former President Lee Myung-bak, who is standing trial for bribery, called the allegations against him “shocking and insulting” during his first hearing on Wednesday at the Seoul Central District Court.

Lee, who served from 2008 to 2013, faces 16 charges including bribery, tax evasion and abuse of power. Authorities detained him on March 22 and indicted him on April 9.

Prosecutors believe that Lee, 76, accepted bribes worth about 11.1 billion won ($10 million) and embezzled 35 billion won while he was in office. The former president, a conservative, has decried his trial as part of the current administration’s “political retaliation” against him.

Lee appeared in court wearing a black suit and delivered a public statement where he denied the charges against him. In particular, he took issue with one allegation that he took bribes from Samsung.

During his presidency, prosecutors said, Lee pressured Samsung into paying legal fees of about 6.8 billion won to a U.S. law firm that was representing an auto parts maker that Lee technically owned, though on paper, the company belonged to his brother.

Prosecutors believe the money was given to him in exchange for a special presidential pardon of Samsung Chairman Lee Kun-hee, who was convicted for tax evasion and generating slush funds in 2008.

In court, the former president said his decision to pardon the Samsung chairman was purely out of “national interest” because the country was preparing a third bid to host the 2018 Winter Olympics and the Samsung chairman had been a member of the International Olympic Committee. After he was indicted, he voluntarily gave up his seat. After the president pardoned him in 2009, the committee reinstated him the following year.

“I stand here today with a heavy heart,” Lee said in court. “After prosecutors began their probe, I was told I should refuse to give testimony and boycott the trial once I got indicted. But as a person who served as president, no matter how unfair I thought all was this, I couldn’t accept that.”

His lawyers had advised him to ask the court to call in witnesses involved in the case so that he could prove to the judge that they delivered false testimony to prosecutors, Lee said, but he rejected the idea.

“I don’t know why, but they’ll probably have their own reason” for why they lied, Lee said. “It’s very depressing for me to have the public watch me arguing with the people I led this country with.

“My lawyers tried to dissuade me,” Lee continued, “but I asked them to prove my innocence with factual information and legal principles.”