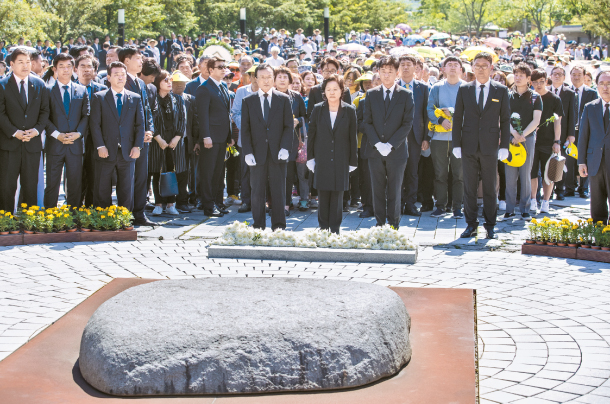 Relatives of the late President Roh Moo-hyun and his supporters commemorate the ninth anniversary of his death on Wednesday at Bongha Village in Gimhae, South Gyeongsang. [YONHAP]

Relatives and former supporters of the late President Roh Moo-hyun gathered in his hometown of Gimhae, South Gyeongsang, on Wednesday to commemorate the ninth anniversary of his death by suicide, but the timing of the ceremony - just weeks before an election - cast the event with political overtones.

Addressing a crowd of about 3,000, Chung Sye-kyun, the speaker of the National Assembly, highlighted the recent record of the Democratic Party, the successor of Roh’s United Democratic Party. He alluded to Roh’s goal of having his party win seats in the country’s conservative strongholds, an achievement he never saw in his lifetime. In Korean politics, partisanship is typically divided down regional lines, with the eastern part of the country usually voting conservative and the western part swinging liberal.

“President Roh,” Chung said, “you once told me after completing your term as president that, if the United Democratic Party won even just 10 seats in the National Assembly from Busan and South Gyeongsang, we can say with confidence that the issue of regional factionalism has been solved. In the last general election and presidential election, we have seen the strong walls of regional party politics crumble, and we will see more of this movement.”

The crowd included a smattering of lawmakers from the Democratic Party, Justice Party and Party for Democracy and Peace. Also in attendance were Roh’s wife, Kwon Yang-sook; her son, Roh Geon-ho; officials from the Moon Jae-in administration; and candidates in the local election set to take place on June 13.

Members of the conservative opposition, the Liberty Korea Party, did not attend. President Moon, who served as Roh’s chief of staff, was unable to attend because he was on a plane back from Washington after meeting with U.S. President Donald Trump.

Perhaps the most controversial figure to attend the ceremony Wednesday was Kim Kyoung-soo, a former lawmaker who is running for governor of South Gyeongsang under the Democratic Party. Kim is embroiled in a scandal where he allegedly worked with a shady political blogger and his group to manipulate online opinion in favor of President Moon during last year’s election. Kim served as one of Roh’s personal secretaries and has close ties with Moon as well.

“I think about your words often these days,” Kim wrote on a Facebook post commemorating Roh. “You said, ‘The truth is strong and powerful.’ It gives me strength. We are no longer who we were when we lost you nine years ago. So I will win [this race]. I must.”

“Just like there were people who didn’t like you and attacked you, I have been attacked here and there a few times these days,” Kim wrote alluding to the scandal. “They just seem to dislike change. They did then, and they do now, but they are only afraid of a new era. Watch on, Mr. President, as we bring in waves of new mountains into this era, with the people alongside us.”

The race for South Gyeongsang governor has narrowed down to Kim Kyoung-soo and Kim Tae-ho of the Liberty Korea Party. According to the latest poll figures from the Korea Research Center, Kim Kyoung-soo is in the lead with 41.9 percent, while Kim Tae-ho has 27.3 percent.

On Tuesday, Kim Tae-ho criticized Kim Kyoung-soo for the scandal, known in Korea as the “Druking case” for the blogger’s online name.

“Kim Kyoung-soo has troubled the people’s hearts with the Druking case, but he has not apologized to the public,” Kim Tae-ho told the JoongAng Ilbo. “He keeps saying that Druking’s statements are fake like a novel, but Kim Kyoung-soo’s retorts seem more fake to me.”

The scandal appears to be affecting voters’ opinions in the province.

“I began to support the Democratic Party after Roh’s death,” said Yoon Jin-soo, a 49-year-old taxi driver. “I want to vote for Kim Kyoung-soo, but I have to see how the investigation on the Druking case turns out before I make the final decision.”

“They must think fools of us in South Gyeongsang to have put out someone who should be arrested as a candidate for the post,” said another taxi driver, Goh Dong-chan, 52. “The government had better tell everyone what it did.”

But when Kim Kyoung-soo showed up at a fish market in Sacheon, South Gyeongsang, on Tuesday as part of a meet-and-greet with locals, some merchants flocked around him and asked for his signature.

“The Democratic Party and President Moon Jae-in are going strong,” said Park Shim-ja, the owner of a sushi restaurant inside the market. “If Kim Kyoung-soo is elected, that will be good news for all of us here.”

“The investigation into the Druking case has not brought anything to light [about Kim] yet,” said Lee Jin-ryong, a 77-year-old owner of a clothing store in Changwon, South Gyeongsang. “This time, someone from the Democratic Party should be elected as governor of South Gyeongsang, as a warning to the Liberty Korea Party.”

Druking, whose real name is Kim Dong-won, and his associates are on trial for manipulating the comments section on Naver, a portal website that many Koreans use to access news. Police questioned Kim Kyoung-soo as a witness earlier this month after allegations that he was involved with the group.

“We helped out Kim Kyoung-soo when he needed us, but he has abandoned us after using us,” a member of the group wrote on the blog on Wednesday. “Prosecutors must conduct an impartial investigation of Kim Kyoung-soo, who is a critical member of the Moon government,” another member wrote.