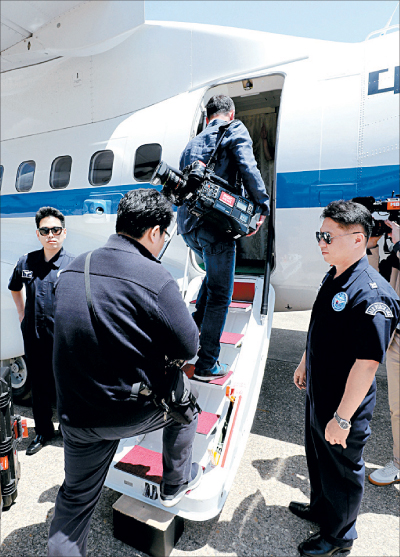 South Korean journalists board a government plane on Wednesday at the Seoul Air Base in Seongnam, Gyeonggi, to fly to Wonsan, North Korea. [YONHAP]

A group of eight South Korean journalists flew into North Korea on Wednesday afternoon after Pyongyang, at the last minute, accepted Seoul’s list of reporters to cover the dismantling of the Punggye-ri nuclear test site.

Eight journalists from two media outlets departed at around 12:30 p.m. from Seoul Air Base in Seongnam, Gyeonggi, on a South Korean government plane and flew directly to Kalma Airport in North Korea’s eastern port city of Wonsan.

After arriving in Wonsan, they joined journalists from four other countries - China, Russia, the United Kingdom and the United States - to board a special train to head to the site of the demolition of the Punggye-ri nuclear test site to take place on Thursday or Friday.

The overnight train trip to the mountainous Punggye-ri area in northeastern North Hamgyong Province was expected to take at least 12 hours. The train is expected to travel a distance of 416 kilometers (258 miles) northward, at a speed averaging around 35 kilometers per hour, from Wonsan to Chaedok Station in Kilju County, which leads into the nuclear test site, according to Seoul experts.

North Korea had invited a limited number of journalists from the five countries to cover its dismantling of the nuclear test site, set to take place between Wednesday and Friday, depending on weather conditions.

The other foreign journalists and television crew flew into Wonsan from Beijing Capital International Airport on a North Korean charter flight on Tuesday morning. The South Korean journalists, who had been on standby in Beijing since Monday despite not being issued visas by the North because Pyongyang had not accepted Seoul’s list of journalists, was excluded from that flight and ended up returning home. But North Korea finally accepted the list early Wednesday.

The South’s Ministry of Unification, which handles relations with the North, said through a statement that it was able to notify the North through the inter-Korean Panmunjom channel of the list of eight journalists from two media outlets - broadcaster MBC and wire service News1 - earlier that morning. It added that the government “plans to take necessary measures to support our press corps to travel to the North along with their mode of transportation.”

By noon, the South Korean journalists headed to the air base just outside of Seoul and boarded the government’s VCN-235 transport aircraft. The plane flew over the East Sea and arrived at Kalma Airport a little over two hours and 20 minutes later, at around 2:50 p.m. There, they were greeted by airport officials and went through customs, having their mobile phones, equipment and suitcases inspected.

South Korea’s press corps arrived by bus at the press center at the Kalma Hotel a little before 5 p.m. and joined the other foreign reporters. The group of journalists from the five countries was scheduled to depart Wonsan on the North’s train to Chaedok Station at around 7 p.m.

A summit between South Korean President Moon Jae-in and U.S. President Donald Trump took place in Washington on Tuesday. There was speculation that the North might have been awaiting the results of this summit before accepting South Korea’s reporters.

The demolition of the Punggye-ri nuclear test site has been seen as a gesture by the North of its intention to denuclearize and comes ahead of its planned summit with the United States on June 12 in Singapore. While Pyongyang has yet to announce the exact date of the dismantlement ceremony, a North Korean official reportedly indicated that Thursday was a possibility if weather conditions are good.