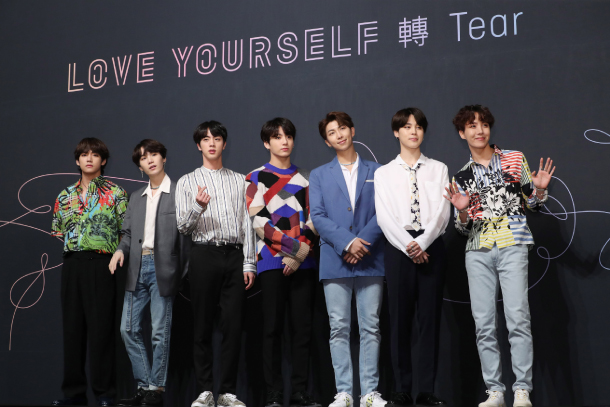 BTS during a photo session at a news conference in central Seoul on Thursday. [YONHAP]

Having already set a litany of new records for the K-pop industry, BTS is now aiming higher: grabbing the top spot on the Billboard 200 albums chart and, ultimately, on the highly competitive Billboard Hot 100 songs chart, the boy band said Thursday.

“Numbers are not so important,” team leader Rap Monster said after being asked to give BTS’ numerical goals for the latest album, “Love Yourself: Tear,” at a news conference in central Seoul.

But with the latest album, he said the group’s goal is the top spot on the Billboard 200 albums chart.

“As with the Billboard Hot 100 chart, we are aiming to enter the top spot, since our ‘Mic Drop’ previously landed in the 28th spot there,” he said. “First, we will aim to enter the top 10, which is known to be concrete, and then we will dream about becoming No. 1. Becoming No. 1 on the Hot 100 is our goal.”

Within just one week after the album’s release last Friday, BTS has renewed its own records set for the K-pop scene.

On Sunday in the United States, the band scooped up its second Billboard Music Award in the top artist category and staged its first live performance of the album’s main track, “Fake Love,” at the U.S. awards event.

The members were “thrilled” by their Billboard victory, as well as the roaring response shown by fans at the performance.

“We couldn’t imagine at all that we could perform on the Billboard stage,” member Jin said. “It was a very thrilling moment. We were really encouraged by the presence of so many Armies,” referring to BTS fans.

“We have often been asked why we are so loved,” Rap Monster said. “The causes may be our attempt to reach out through social media as idols and entertainers, as well as the new media that translated our music from Korean to many different languages that were again spread through YouTube.”

BTS members also “stuck to our initial thinking that we started with the music we love, and we are a performance group,” the team leader said.