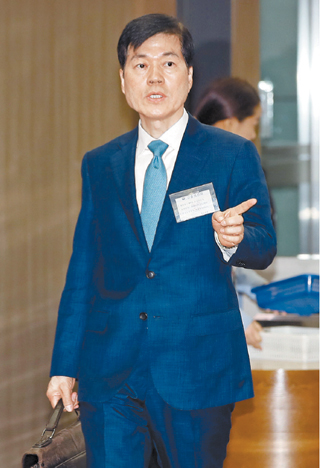 Korea’s top financial regulator held the second round of meetings to determine whether Samsung BioLogics intentionally bloated its valuation ahead of a planned market listing in 2016, as claimed by the Financial Supervisory Service, a financial watchdog agency.

The outcome of the meetings had not been revealed as of press time.

The Financial Services Commission declined to comment on when or whether the final decision is likely to be reached at the latest meeting. Should committee members fail to reach a consensus, the issue will be transferred to the securities and futures commission meeting next month or to a third review session.

Members of the securities and futures commission are set to meet on June 7.

In a court-like setting on Friday, the bio company and the Financial Supervisory Service had time to make their cases and refute each other’s arguments, a noticeable departure from the typical format where a corporate party isn’t able to enter the meeting until after commissioners have discussed the case among themselves.

“The two parties [Samsung BioLogics and the Financial Supervisory Service] will take turns to make their cases,” said the Financial Services Commission in a statement, “If needed, the third party can come in for further discussion.”

“The third party” refers to audit firms hired by BioLogics.

The Financial Services Commission quoted Kim Hak-soo, chairperson of the review session, as saying that “Today’s meeting will be focused on listening to experts’ views and will be carried out in an orderly manner.”

The dispute centers on the drug maker’s motivations in shifting Samsung Bioepis from subsidiary to affiliate status in 2015, because the valuation of BioLogics surged after the shift.

BioLogics explained that it changed the status in a pre-emptive measure against the possibility of Biogen exercising a call option to raise its stake in Bioepis. Biogen is a U.S. biotech company that jointly invested in Bioepis in 2012 with a call option that could increase its stake to 49.9 percent.

The major point of contention during the first review session was whether Biogen actually intended to exercise the call option back in 2015.

The Financial Supervisory Service reportedly said that the U.S. company refrained from using the call option in 2015 and that the change in Bioepis’ relation with BioLogics was purely intended to inflate its valuation. BioLogics denied the allegation.

Biogen expressed its intention to exercise the right last week, according to BioLogics.

The stock price of Samsung BioLogics gained 2.99 percent on Friday to close at 430,500 won ($399.61), apparently reflecting that investors anticipate a positive decision.